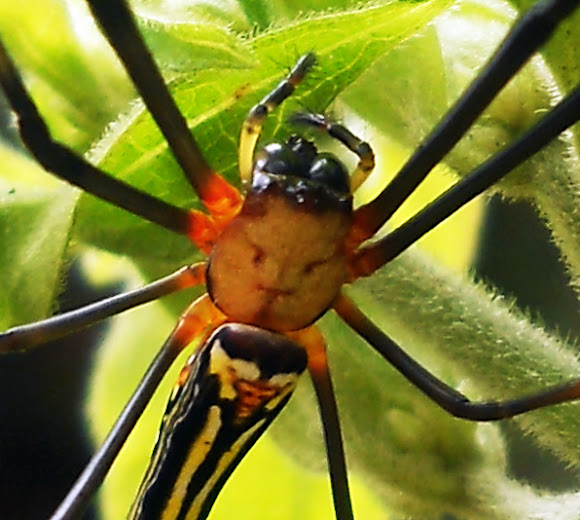 "Human face" in spider ! ! ! The golden silk orb-weavers (genus Nephila) are a genus of araneomorph spiders noted for the impressive webs they weave. Nephila consists of numerous individual species found around the world. They are also commonly called golden orb-weavers, giant wood spiders, or banana spiders. In North America, the golden silk orb-weavers (see also Nephila clavipes) are sometimes referred to as writing spiders The species N. jurassica, which lived about 165 million years ago, had a leg span of some 15 cm, and is the largest known fossilized spider. .

Yellow threads of their web shine like gold in sunlight. Xanthurenic acid, two quinones and an unknown fourth compound contribute to the yellow color. Experimental evidence suggests that the silk's color may serve a dual purpose: The spider is able to adjust pigment intensity relative to background light levels and colour; the range of spectral reflectance is specifically adapted to insect vision. The webs of most Nephila spiders are complex, with a fine-meshed orb suspended in a maze of non-sticky barrier webs. As with many weavers of sticky spirals, the orb is renewed regularly if not daily, apparently because the stickiness of the orb declines with age. When weather is good (and no rain has damaged the orb web), subadult and adult Nephila often rebuild only a portion of the web. The spider will remove and consume the portion to be replaced, build new radial elements, then spin the new spirals. This partial orb renewal is distinct from other orb-weaving spiders that usually replace the entire orb web. In 2011 it was discovered that the web of Nephila antipodiana contains ant-repellent chemicals to protect the web

Ha! - I think I was looking at the wrong face, there are actually two. The carapace will fade, but the features will remain.

At the front of the abdomen is a red triangle, which kinda looks like a face - this will disappear when the spider reaches the final couple of instars into adulthood.

A fine series of images.

Thank you so much Folicallychalled... We too see it here a lot,,,But never observed closely!

This is a female nephila pilipes juvenile. The 'face' will disappear with subsequent shedding. I see a lot of these at my location.

Thank u Argy Bee..Thats a nice info!
Sometimes we walk through webs unknowingly or in hurry..Then so much effort by them to make web will be wasted!

Great specimen. Those yellow threads are incredibly strong and web is sticky. I have walked into a web and not able to remove it all for 30 minutes washing. Must be water proof too. :(

Great capture Adarsha,congrats and thanks for sharing

@Leana : Yeah...Thats why i cropped the "face" like portion of the spider....

Thank you Yuko..This spider amazed me !