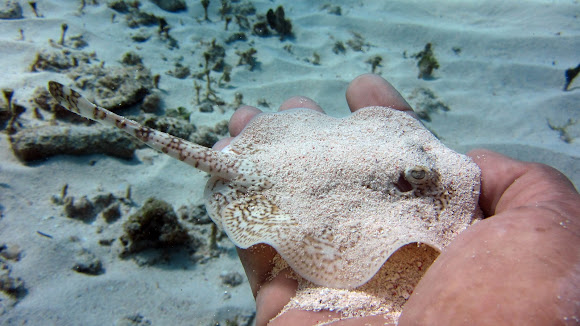 For my 1500 spotting i have this beauty. Photo take at -30 ft on a sandy bottom next to a coral reef. small juvenile stingray smaller then the palm of my hand just fantastic it aloud me to hold it for a minute i love this guys.It has a nearly circular pectoral fin disc slightly longer than wide, with a short, obtuse snout. The eyes are immediately followed by the spiracles. There is a narrow curtain of skin between the nostrils, with a fringed posterior margin. The mouth is nearly straight and contains a transverse row of 3–5 papillae on the floor.The tail is stout and flattened, comprising less than half the total length, and terminates in a small, leaf-shaped caudal fin about a quarter high as long. Wikipedia.

This bottom-dwelling species inhabits sandy, muddy, or seagrass bottoms in shallow inshore waters, commonly near coral reefs. Found from Florida all the Caribbean sea to Brazil.

Thanks so much for your wonderful comments to all :)

Congratulations with both :D

Congratulations Gerardo on this wonderful spotting and SOTD! :)

What an awesome experience for you, Gerardo! Congrats on your 1500th spot!

Thanks to all the Rangers is been a great trip been part of this is an Honor to me hope it last for long :):)

Oh Wow :):):)
Thanks Peter , Yasser and Karen and all PN staff is always so great to be part of this Project and specially when you have a cool surprise like this one.
Thanks somuch to our baby stingray and to all the people that is part of this Project and to all the ones that has made my life more interesting, Thanks so much for your wonderful comments and friendship mi friends :):):)

Congrats on your SOTD and what a wonderful capture and story. To hold this beautiful creature had to be a thrill. I know it would be for me. I am thrilled when I can get a chickadee to eat from my hand or land on me. Congrats again.

What a magic moment, Gerardo, really deserves a SOTD. Congratulations, my friend.

Well fancy that. Congratulations to you both... fantastic spotting Gerado!

Great cache Gerardo my friend,congrats on the SOTD,thanks for sharing

Congrats for honor and efforts of showing such a amazing one Fish on Project Noah.