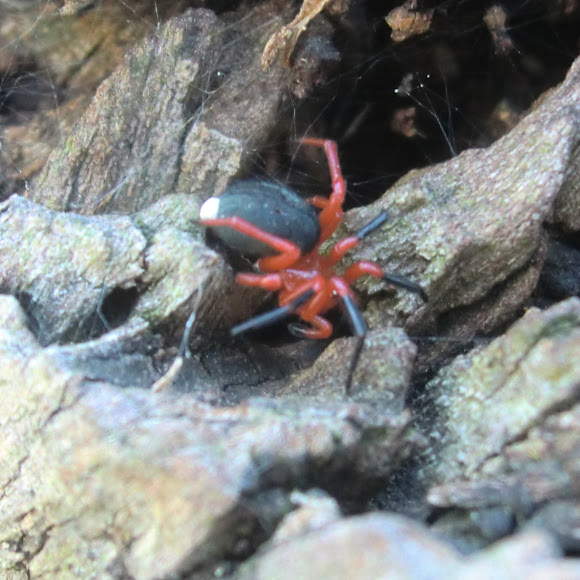 A dangerous looking spider with large black abdomen and sexy black stockings. The rest of the spider is bright red. Approximately 18mm across.

"Not so long ago there were only five Australian Red and Black Spider species, but from those few arachnids and with microscopic study, particularly of the genital region, they have multiplied now into 29 species in 9 genera. Not only that, but they have been removed from the Theridiidae family and placed into their very own, Nicodamidae. These Red and Black Spiders were often known by a single species Nicodamus bicolor, but that species name has been changed to Nicodamus peregrinus, and now restricted to the Eastern States.......... There are no recorded ill effects from the bites of these spiders, but now with so many different species, there may be some with a venom toxic to humans, so it would be wise not to take chances, particularly with these vivid red species as they are usually brightly colored for a reason.... " - http://esperancewildlife.blogspot.com.au...

nice, like the natural stockings, nature is amazing ain't it?