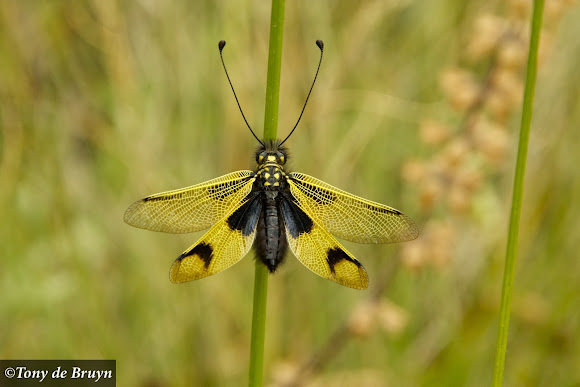 Adult owlflies are aerial predators feeding on other insects. When disturbed, some owlflies will release a strong, musk-like chemical to deter enemies. Adults of many New World species are most active at sunset and dawn and can often be collected around lights. During the day, such adults rest on stems and twigs with the body, legs, and antennae pressed to the stem. The abdomen in a few species is held up, projecting into the air, to look like a broken twig. Many Old World species, however, are most active during the day, and are brightly colored – many even hold their wings spread at rest like dragonflies; perhaps this is a form of mimicry to benefit from the fact that dragonflies are aggressive predators which smaller predatory insects (for which the average neuropteran would be prey) would be better to avoid. Most owlflies average about 2 inches in length. Adult Ascalaphinae such as Ululodes have large divided eyes, which is where the common name "owlfly" came from, in addition to their crepuscular habits. Owlflies are worldwide in distribution, though in North America they are primarily southerly. Eggs are laid on twigs or under stones. Larvae are predatory, and lie on the ground or in vegetation, covered with debris, waiting for prey. Larvae resemble those of antlions, but have a "finger-like appendage" on the side of each segment. Some genera actively cement sand and debris onto their bodies as camouflage. Pupation occurs in a spheroidal silk cocoon in leaf litter.

On our way to do some rock climbing in the south of France near the village of Plampinet, we stumbled upon this very beautiful (butterfly). Unfortunately I did not have a macro lens at hand so I had to take this picture with a 270mm telelens. Otherwise I could have made some better closeups from the (buterfly). Sadly I can't find the name of the species so if someone knows it, please help. It was approximately 1" and the location was a flowery meadow between a fast flowing river and some mountains. At a altitude of about 5000ft.

It really is a gorgeous insect to spot! Thank you Braulio and Lauren.

What a beautiful gorgeous creature. I always wanted to find one of these.
Wonderful pictures.

It is, in particular the first picture. Thank you Yuko!

Thank you Sophietje and Toshimi!

Nice pictures & thanks for the information "Tonypedia" ;-)

Thank you Patricia! That was fast and correct :)