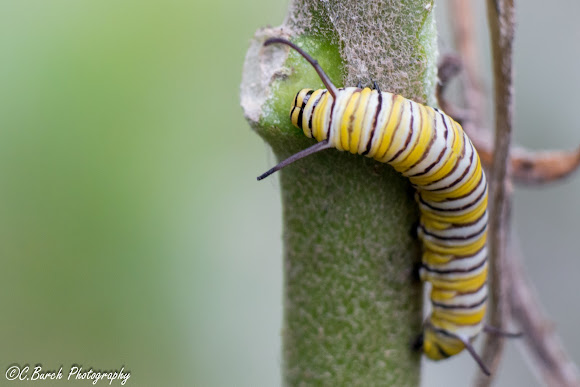 From Wiki: The monarch butterfly (Danaus plexippus) is a milkweed butterfly (subfamily Danainae) in the family Nymphalidae. It may be the most familiar North American butterfly. Its wings feature an easily recognizable orange and black pattern, with a wingspan of 8.9–10.2 cm (3½–4 in)[3] The viceroy butterfly appears similar in color and pattern, but is markedly smaller and has an extra black stripe across the hind wing. The eastern North American monarch population is notable for its annual southward late-summer/autumn migration from the United States and southern Canada to Mexico. During the fall migration, it covers thousands of miles, with a corresponding multi-generational return North. The western North American population of monarchs west of the Rocky Mountains most often migrate to sites in California but have been found in overwintering Mexico sites.[4][5] Monarchs were transported to the International Space Station and were bred there.[6] LARVAE Larvae[edit] The caterpillar goes through five major, distinct stages of growth and after each one, it molts. Each caterpillar, or instar, that molts is larger than the previous as it eats and stores energy in the form of fat and nutrients to carry it through the nonfeeding pupal stage. 5th instar with the white spots visible on the prolegs. The first instar caterpillar that emerges out of the egg is pale green and translucent. It lacks banding coloration or tentacles. The larvae or caterpillar eats its egg case and begins to feed on milkweed. It is during this stage of growth that the caterpillar begins to sequester cardenolides. The circular motion a caterpillar uses while eating milkweed prevents the flow of latex that could entrap it. The second instar larva develops a characteristic pattern of white, yellow and black transverse bands. It is no longer translucent but is covered in short setae. Pairs of black tentacles (stinkhorns) begin to grow. One pair grows on the thorax and another pair on the abdomen. The third instar larva has more distinct bands and the two pairs of tentacles become longer. Legs on the thorax differentiate into a smaller pair near the head and larger pairs further back. These third stage caterpillars began to eat along the leaf edges. The fourth instar has a different banding pattern. It develops white spots on the prolegs near the back of the caterpillar. The fifth instar larva has a more complex banding pattern and white dots on the prolegs, with front legs that are small and very close to the head.

Overwintering populations of D. plexippus are found in Mexico, California, along the Gulf coast, year-round in Florida, and in Arizona where the habitat provides the specific conditions necessary for their survival.[23][24] The overwintering habitat typically provides access to streams, plenty of sunlight (for body temperatures that allow flight), appropriate vegetation on which to roost, and is relatively free of predators. Overwintering, roosting butterflies have been seen on sumacs, locusts, basswood elm, oak, osage orange, mulberry, pecan, willow, cottonwood, and mesquite.[25] While breeding, its habitat can be found in agricultural fields, pasture land, prairie remnants, urban and suburban residential areas, gardens, trees, and roadsides – anywhere where there is access to larval host plants.[26] Habitat restoration is a primary goal in monarch conservation efforts. Habitat requirements change during migration. During the fall migration, butterflies must have access to nectar-producing plants. During the spring migration, butterflies must have access to larval food plants and nectar plants.