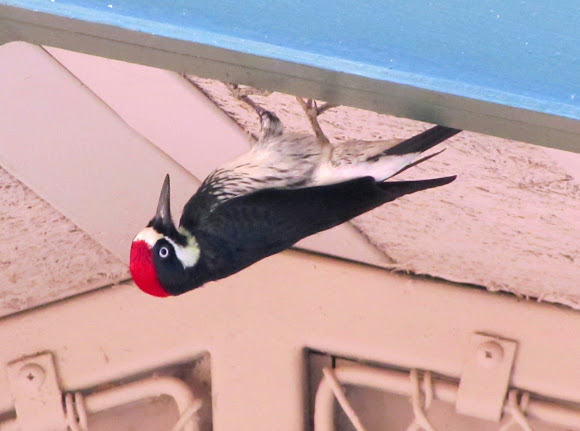 According to Wikipedia, the adult Acorn Woodpecker is a brownish-black head, back, wings and tail, white forehead, throat, belly and rump. The eyes are white. There is a small part on the small of their backs were there are some green feathers. The adult male has a red cap starting at the forehead, whereas females have a black area between the forehead and the cap. The white neck, throat, and forehead patches are distinctive identifiers. When flying, they take a few flaps of their wings and drop a foot or so. White circles on the their wings are visible when in flight. Acorn Woodpeckers have a call that is almost like they are laughing.

The breeding habitat is forested areas with oaks in the hills of coastal areas and foothills of California and the southwestern United States south to Colombia. This species may occur at low elevations in the north of its range, but rarely below 1000 m in Central America, and it breeds up to the timberline. The breeding pair excavate a nest in a large cavity in a dead tree or a dead part of a tree. A group of adults may participate in nesting activities: Field studies have shown that breeding groups range from monogamous pairs to breeding collectives of seven males and three females, plus up to 10 non-breeding helpers. Young from a single brood have been found with multiple paternity.

Quite amazing they can hang upside down like that.

Thanks Aaron, they are beautiful, boisterous and have a very unique family pattern !

My friend in Fresno was just telling me about these last night. Nice spotting!

Thank You Alicelongmartin , Hema and Thank FynKynd for the ID !

I agree with Fyn, This indeed is an Acorn Wood Pecker.