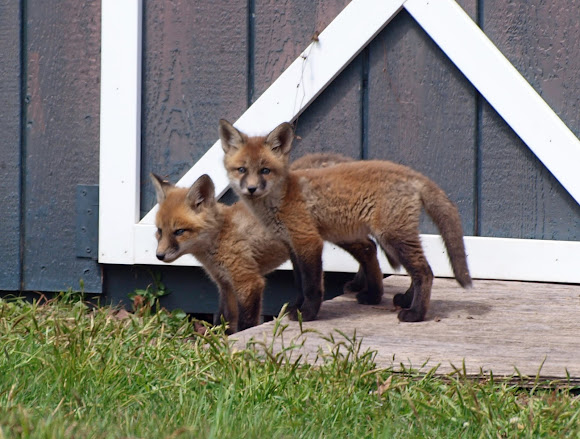 Last winter I came into possession of a portion of an old farmstead (about 3 acres). The home required extensive renovation and it was uninhabited for about six months. The home is on about 2.25 acres and across the street is the remaining 0.75 acres which is an interesting wetland. There is a shed in the backyard...the yard into about three quarters by apple trees (old ones) and blueberry bushes. In the backyard (just before the remains of the farm dump) is a shed. A female Red Fox made a den underneath. There were about 5-7 kits in the litter. The mother would go out hunting and the kits would come out and play and sunbathe. There is a small rise before being in full view of the shed. so I could watch them without being seen. Actually, they were pretty oblivious to anything but their mom was never very far off. You could look under the shed and see a bunch of eyes looking back at you. There were remains of various meals scattered about the back of the shed. They were pretty content. About a month or so after moving into the house, the fox and kits were not as easily observable. Eventually, it was obvious they moved out. It appeared they moved across the street for the summer. I would occasionally them running back and forth across the street.

Nice spotting - did you see them grow up?