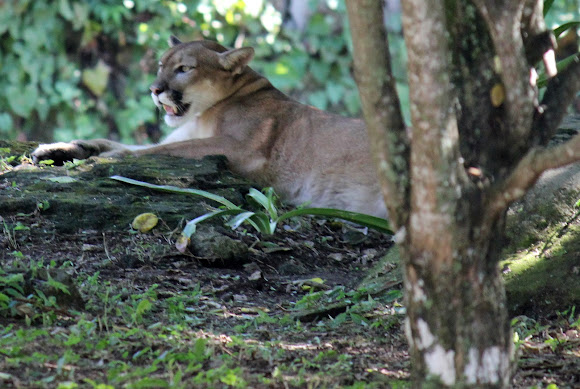 Wow i still shaking, i just spot this guy two hours ago in a remote area in the jungle very close no more than 40 mt away , big Cougar laying on the side of a path notice my presence, it stand and just vanish in the jungle i was alone far from the car so i just star moving really fast to the car uuuufff. this is another spot of a lifetime i don´t think i ever going to see one again here. I can believe it. I´m not sure if this is a subspecies? It is the second heaviest cat in the Western Hemisphere, after the jaguar. Solitary by nature and nocturnal, the cougar is most closely related to smaller felines and is nearer genetically to the domestic cat than true lions.Cougars are slender and agile members of the cat family. They are the fourth largest cat, and adults stand about 60 to 90 cmtall at the shoulders. Adult males are around 2.4 m long nose to tail and females average 2.05 m , with overall ranges between 1.5 to 2.75 m nose to tail suggested for the species in general. Of this length, 63 to 95 cm is comprised by the tail. Males typically weigh 53 to 100 kg, averaging 62 kg . Females typically weigh between 29 and 64 kg , averaging 42 kg .Cougar size is smallest close to the equator, and larger towards the poles.The largest recorded cougar was shot in Arizona and weighed 125.5 kg after its intestines were removed, indicating that in life it could have weighed nearly 136.2 kg. Several male cougars in British Columbia weighed between 86.4 and 95.5 kg.

Its range, from the Canadian Yukon to the southern Andes of South America, is the greatest of any large wild terrestrial mammal in the Western Hemisphere.

Very cool!!! What an experience! Thank you for sharing :)

Thanks Joshua , Reza, Ashley, and Janelle:):)

OMG belated, Congratulations Gerardo on this close encounter of a SotD !

It got spotting of the day a few weeks ago Joshua :)

how is this not getting spotting of the day?

So amazing!! My heart was pounding just reading your story! Great job, Gerardo!! I don't think I would have had the ability to take pictures with a Puma this close to me in the wild. Bravo, you!!

Thanks Donna, Gilma and Ashley :)

Absolutely amazing. I would still be shaking too! Congratulations.

Very jealous of this Gerardo! I hope to encounter one some day :) Congrats on spotting of the day too!

Thanks Adam Jakubko, Dan, Noah, It was an epic encounter indeed :):)

Congratulations on Spotting of the Day, Gerardo! Beautiful!!

That's a spotting! Gerardo, you get really lucky! And your hands did not shake at all to take those pics ?!
You well deserved a spotting on the day!

Wow thanks so much to all my friends for your wonderful comments :)

Nice work dude, this is a rocking spot!!

Thrilling!
Congratulations on a lucky spot and a steady hand to take the pictures.
I'd be with a nervous laugh jumping around.