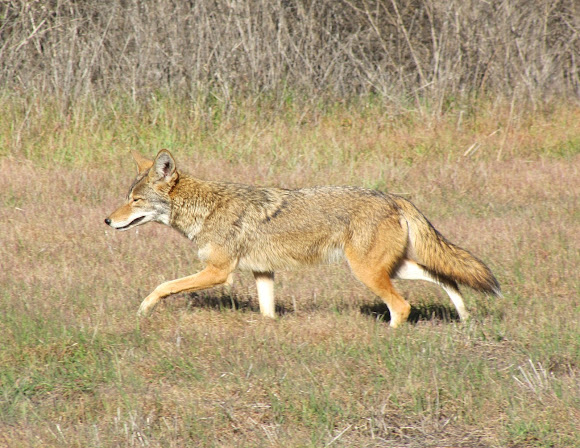 According to Wikipedia, 19 subspecies of the coyote are currently recognized, with 16 in Canada, Mexico, and the United States, and three in Central America. Unlike the related gray wolf, which is Eurasian in origin, evolutionary theory suggests the coyote evolved in North America during the Pleistocene epoch 1.81 million years ago alongside the dire wolf. Although not closely related, the coyote evolved separately to fill roughly the same ecological niche in the Americas that is filled in Eurasia and Africa by the similarly sized jackals. Unlike the wolf, the coyote's range has expanded in the wake of human civilization, and coyotes readily reproduce in metropolitan areas.

The coyote also known as the American jackal, brush wolf, or the prairie wolf, is a species of canine found throughout North and Central America, ranging from Panama in the south, north through Mexico, the United States, and Canada. It occurs as far north as Alaska and all but the northernmost portions of Canada.

Interspecific hybridization Coyotes will sometimes mate with domestic dogs, usually in areas such as Texas and Oklahoma, where the coyotes are plentiful and the breeding season is extended because of the warm weather. The resulting hybrids, called coydogs, maintain the coyote's predatory nature, along with the dog's lack of timidity toward humans, making them a more serious threat to livestock than pure-blooded animals. This crossbreeding has the added effect of confusing the breeding cycle. Coyotes usually breed only once a year, while coydogs will breed year-round, producing many more pups than a wild coyote. Differences in the ears and tail generally can be used to distinguish coydogs from domestic or feral dogs or pure coyotes. Breeding experiments in Germany with poodles, coyotes, and later on with the resulting dog-coyote hybrids showed that, unlike wolfdogs, coydogs exhibit a decrease in fertility, significant communication problems, and an increase of genetic diseases after three generations of interbreeding. Coyotes have also been known, on occasion, to mate with wolves, mostly with eastern subspecies of the grey wolf such as the Great Plains Wolf, though this is less common than with dogs, due to the wolf's hostility to the coyote. The offspring, known as a coywolf, is generally intermediate in size to both parents, being larger than a pure coyote, but smaller than a pure wolf. A study showed that of the 100 coyotes collected in Maine, 22 had half or more grey wolf ancestry, and one was 89% grey wolf. The large eastern coyotes in Canada are proposed to be actually hybrids of the smaller western coyotes and grey wolves that met and mated decades ago, as the coyotes moved toward New England from their earlier western ranges. Ontario Ministry of Natural Resources research scientist Brent Patterson has revealed findings that most coyotes in Eastern Ontario are wolf-coyote hybrids and that the Eastern wolves in Algonquin Park are, in general, not interbreeding with coyotes. Similarly, on a population level, Roland Kays, curator of mammals at the State Museum of New York has obtained preliminary DNA evidence for eastern coyotes suggesting interbreeding and a genetic makeup of 85–90% coyote, perhaps 10% wolf and slightly less than 5% dog - "a giant Canis soupus", in his words. The red wolf is thought by some researchers to be in fact a wolf/coyote hybrid rather than a unique species. Strong evidence for hybridization was found through genetic testing, which showed red wolves have only 5% of their alleles unique from either gray wolves or coyotes. Genetic distance calculations have indicated red wolves are intermediate between coyotes and gray wolves, and they bear great similarity to wolf/coyote hybrids in southern Quebec and Minnesota. Analyses of mitochondrial DNA showed the existing red wolf populations are predominantly coyote in origin.

Thanks J and Luis !

Congrats Reza , to see and photograph this beautiful coyote.

Beautiful shots, Reza! I love the expression on the first page!

Thanks Nuwan and Christy !