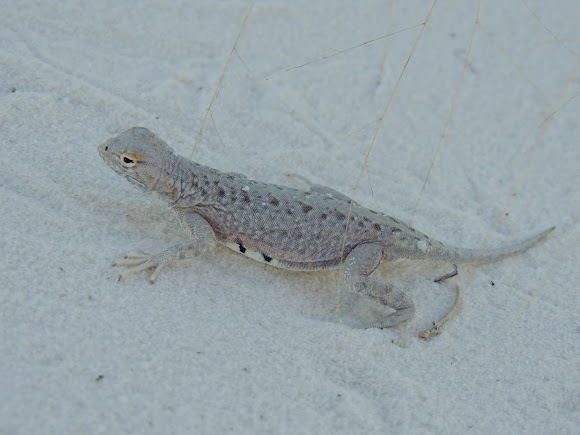 The lesser earless lizard is common the American Southwest. This individual is a white morph. Many animals within White Sands National Monument have developed a dramatic white coloration, a fantastic example of evolution. From the foxes to spiders to lizards, many animals residing in the monument have slowly changed from their darker ancestral coloration to dramatic white. The white gypsum environment has led to the rapid evolutionary response through means of Natural Selection. This process of adaptation takes place since animal populations express variation in color. In every population there are individuals with darker and lighter coloration. In this case, lighter colored individuals would have a better chance of surviving the white environment and thus would produce lighter offspring, which would in turn be better adapted to survive in the white environment. So as mating continues, more and more lighter colored individuals would be produced and introduced into the population.

Studies of animal evolution have taken place at White Sands.