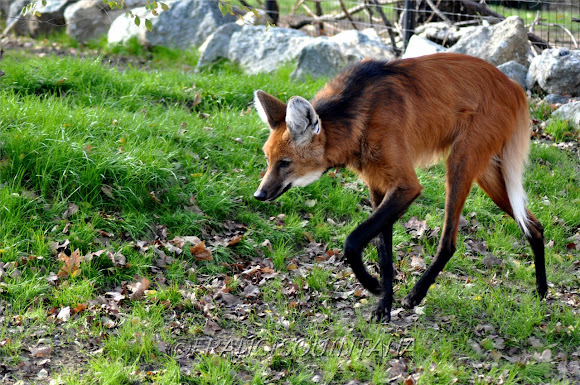 The maned wolf has often been described as "a red fox on stilts" owing to its similar coloration and overall appearance, though it is much larger than a red fox and belongs to a different genus. The adult animal stands 67 to 107 cm (26 to 42 in) tall at the shoulder, averages 125 cm (49 in) in head-and-body length and weighs 20 to 34.09 kg (44 to 75.2 lb).[6][7][8] The maned wolf is the tallest of the wild canids. The long legs are probably an adaptation to the tall grasslands of its native habitat.[9] The tail measures 28 to 45 cm (11 to 18 in) in length.[10] Fur of the maned wolf may be reddish brown to golden orange on the sides with long, black legs and a distinctive black mane. The coat is further marked with a whitish tuft at the tip of the tail and a white "bib" beneath the throat. The mane is erectile, and is typically used to enlarge the wolf's profile when threatened or when displaying aggression. The maned wolf is also known for its distinctive odor, which has earned it the nickname "skunk wolf."

This mammal is found in open and semi-open habitats, especially grasslands with scattered bushes and trees, in south, central-west and south-eastern Brazil (Mato Grosso, Mato Grosso do Sul, Minas Gerais, Goiás, São Paulo, Federal District and recently Rio Grande do Sul), Paraguay, northern Argentina, Bolivia east and north of the Andes, and far south-eastern Peru (Pampas del Heath only). It is very rare in Uruguay, being possibly extirpated. IUCN lists it as near threatened, while it is considered vulnerable by the Brazilian government (IBAMA). It is the only species in the genus Chrysocyon. It is locally known as aguará guazú (meaning "large fox" in the Guarani language), lobo de crin, lobo de los esteros or lobo colorado, and as lobo-guará in Brazil. It is also called borochi in Bolivia.

Unlike other large canids (such as the gray wolf, the African hunting dog, or the dhole) the maned wolf does not form packs. It hunts alone, usually between sundown and midnight. It kills its prey by biting on the neck or back, and shaking it violently if necessary. Monogamous pairs may defend a shared territory of about 30 km2 (12 sq mi), though the wolves themselves may seldom meet, outside of mating. The territory is crisscrossed by paths that the wolves create as they patrol at night. Several adults may congregate in the presence of a plentiful food source; a fire-cleared patch of grassland, for example, which would leave small vertebrate prey exposed to foraging. Both male and female maned wolves use their urine to communicate, e.g. to mark their hunting paths, or the places where they have buried hunted prey. The urine has a very distinctive smell, which some people liken to hops or cannabis. The responsible substance is very likely a pyrazine, which occurs in both plants. (At the Rotterdam Zoo, this smell once set the police on a hunt for cannabis smokers.)

one of my all time fav animals!! great series!