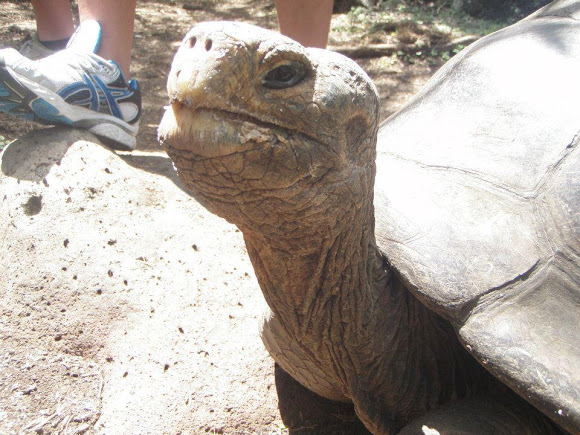 A monitored population of Hybrid Galapagos tortoises. This group was split in two because one half was a pure-breed tortoise while the others are a hybrid between the the hybrid and Santa Cruz subspecies, making them smaller than the pure-breed tortoises as well as some bieng infertile.

Forests of the island of Floreana. We had to travel around 15min on a 4x4 truck to get to the area.

We were able to see one of them mate, which is the second photo. The male starts to hum while trying to get on top of the female and this session lasted 45min. The third picture is a hybrid tortoise. They used a 3ft fence made of rocks to separate the populations. The separation is done so that no more hybrids may breed on the island, although most are hybrids are infertile a cross with the Santa Cruz species has hybrid offspring decreasing their population.

Thanks for the info, our guide had told us of the ship dropping them off and I think the separated populations may be hybrids and another pure-breed species, I can't remember which one at the moment.

Charles Darwin Foundation for the Galapagos 7 years ago

Glad you got to see all that behaviour, Brian! For your information, none of those tortoises kept by the Galapagos National Park in the highlands of Floreana, belong to the Floreana subspecies. I don't know, off hand, where they are from. The Floreana subspecies is thought to have been hunted to extinction by 1850, fifteen years after Charles Darwin's visit of 1835, when he saw shells but no live tortoises there. So, I suggest you just take the "Floreana" out of the ID. - The exciting latest news is that DNA studies have shown that there is a population of tortoises on Wolf Volcano on Isabela which seems to originate from a mix of subspecies, possibly including individuals who belong, at least in part, to the Floreana subspecies. The Darwin Foundation and the G. National Park are working to find out whether there might be Floreana and/or Pinta tortoises there. It's not clear where that mixed batch of tortoises came from. It possibly originated from a whaling ship that had too many and threw them overboard. - If you are interested in all this Galapagos stuff, follow us on facebook.com/darwinfoundation.

Thanks a lot. Yes we were very surprised that the low humming was the male. He even sometimes seemed to "gasp" while on top. Really something to see them up close.

Nice series and interesting to read about the male humming