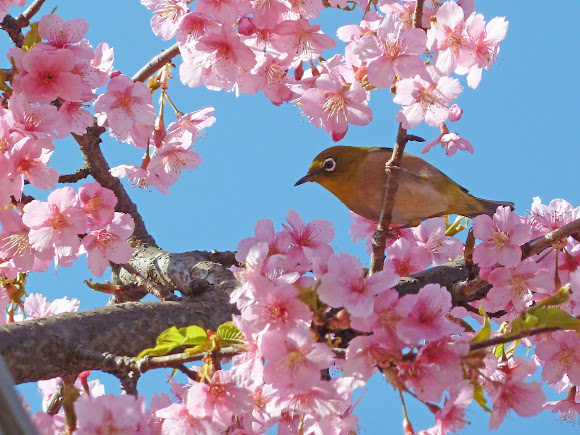 Olive green on its back, from anterior to posterior, and is pale green on its underside. Its feet, legs, and bill range from black to brown. It has a green forehead and a yellow throat. The White-eye has rounded wings and a long, slender bill – both of which indicate this bird to be very acrobatic. Its wings are dark brown, but outlined in green. Like other white-eyes, this species exhibits the distinctive white eyering that gives it its name (mejiro also meaning "white eye" in Japanese). Adults range from 4 to 4.5 inches in length, and weigh between 9.75 and 12.75 grams.

The Japanese White-eye is naturally found in Japan, Taiwan, eastern China, and the northern Philippines. Migratory populations of the bird spend winters in Burma, Hainan Island, and Vietnam. The White-eye is widespread and common in Japan, considered one of the more dominant bird species.

Spotted from my apartment in Tokyo.

I managed to get a closer shot of a mejiro - this time in a cherry tree :)

How ironic. :) Well, they also call them Mejiros in Hawaii.

That's interesting to hear. In Japanese this is called a 'mejiro', which means white eye, and the area I spotted it is Mejiro in Tokyo!

The Japanese white-eye is endemic to where you spotted this, Colin. Cool!

I've also spotted this in Hawaii, where it's invasive.