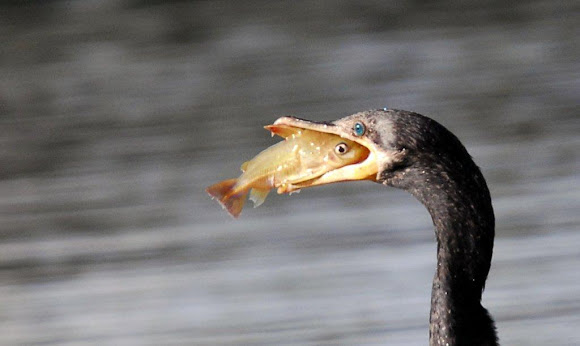 3 pictures of a Neotropic Cormorant fishing in the Paraguay river (Pantanal - Brazil). The Neotropic Cormorant is somewhat different from other cormorants in that it often perches on wires. When it does perch, it is usually with wings spread wide open to dry. These birds feed mainly on small fish and also eat tadpoles, frogs and aquatic insects. They obtain their food by diving underwater and using their feet as a means of propulsion.

Most commonly found in the American tropics and subtropics, the Neotropic Cormorant is a fairly large bird that generally nests around well-watered areas or lakes and rivers. Besides being found on the mainland of North America as far up as Rio Grand and the Californian coast through to Mexico, Central America and the southern parts of South America, it can also be found on smaller landmasses such as the Bahamas, Cuba and Trinidad.

I was seating near the Paraguay river waiting for an eventual event, when appeared that cormorant that I followed with my camera ready just in case that something happened, and it did happen. the conditions of shooting are patience luck and be ready...

many thanks to everyone
Thanks to Gilma Jeannette for the compliment...

Great photography. "the conditions of shooting are patience luck and be ready".You are right but I am afraid you also have to be a very good photographer to captures shots like yours!!

Great timing!
The additional info you gave in your reply to Scott makes the spotting even more interesting to the community; as most people don't read all of the previous comments please can you add that to the notes. Thanks!

To S. Frazier
I am glad my reply was useful.I have had 3 more pictures of that cormorant
As you can guess the first image with the fish was enlarged with cropping.

Paraguay River, great, a place name and a habitat (riverine?) to go with the spotting, perhaps a new data point. Not required by me or PN, but increases the value of the spotting because this is unique information, not found in say, Wikipedia :-) Actually it is best to always add that specific information, which is unique to your spotting. Thanks!

to S. Frazier - Thanks to like my capture
You require details on the shooting, but there was nothing special to say
I was seating near the Paraguay river waiting for an eventual event, when appeared that cormorant that I followed with my camera ready just in case that something happened, and it did happen. the conditions of shooting are patience luck and be ready...

Beautiful capture! Again it would be good if you could provide details of the situation of your spotting in the habitat box, to enhance its scientific value for those who might be interested.