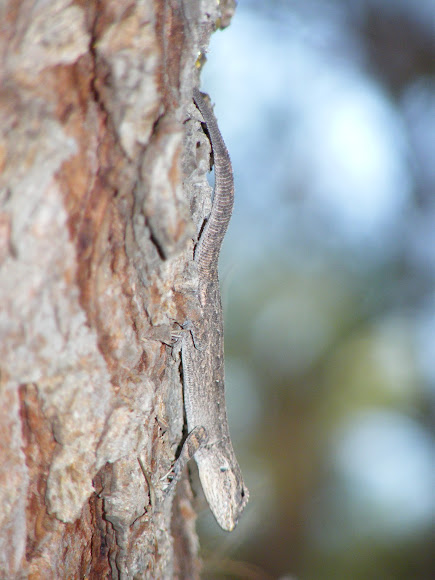 A small (up to 59 mm or 2.3" from snout to vent), slim, gray, gray-brown, or tan lizard with an ornate pattern of thin, dark lines on top of the head. Body markings are variable but usually consist of black or dark gray-brown, irregularly shaped blotches. Some specimens have lengthwise striations and some are plain. On the back are two parallel, lengthwise strips of enlarged, keeled scales separated at the mid-dorsum by a strip of small granular scales. The remainder of the dorsal scales are small and granular. The scales on the tail and limbs are enlarged and keeled. The scales on the belly are smooth and flat. A fold of skin runs along each lower side of the body. Males have two large, blue patches on the belly and a blue, blue-green, green, yellow, or orange throat. In females belly patches are lacking and the throat is yellow, yellow-green, or orange. Its twin strips of enlarged, keeled scales on the back and its shorter tail distinguish this lizard from the similar Long-tailed Brush Lizard.

This is one of our most common and widespread lizards. In Arizona it is absent only from the highest peaks and some of the hot, dry, southwestern dune fields. It is found at elevations ranging from near sea level along the Colorado River to about 9,000'. It is found in most of the state's biotic communities ranging from Lower Colorado River Sonoran Desertscrub to the lower reaches of Petran Subalpine Conifer Forest. It is usually encountered in areas with plenty of features on which to climb such as wooded riparian corridors and boulder-strewn slopes.

This diurnal lizard is an excellent climber and it is commonly seen basking and foraging on urban walls, fences, and building exteriors. In natural settings it climbs and basks on logs, boulders, and trees. It hibernates during the cold months of late fall and early winter. Males are highly territorial. The territorial display includes "push-ups" and extending the brightly colored throat. A variety of insects including aphids, beetles, flies, ants, bees, wasps, termites, moths, butterflies, grasshoppers, and crickets make up the diet of this lizard. It also feeds on a variety of spiders. Mating takes place in spring and summer and one or two clutches of eggs are laid in spring and summer. Clutch size ranges from 2 to 16 eggs.