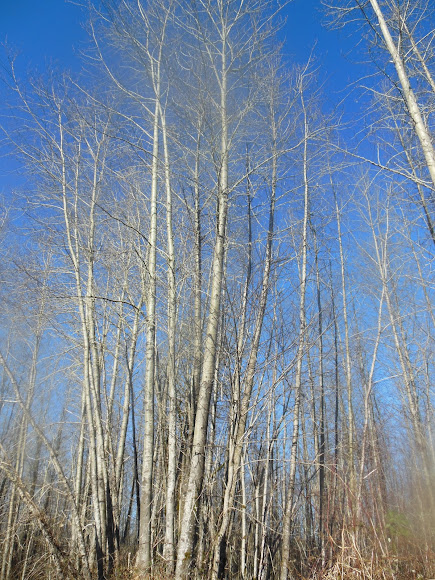 It is a large tree, growing to a height of 30–50 m and a trunk diameter of over 2 m, which makes it the largest poplar species in the Americas. It is normally fairly short-lived, but some trees may live for up to 400 years (Forbes 2006). A cottonwood discovered in Haines, Alaska set the national record at 101 ft (31 m) tall and 32.5 ft (9.9 m) around.[1] The bark is grey and covered with lenticels, becoming thick and deeply fissured on old trees. The bark can become hard enough to cause sparks when cut with a chainsaw.[1] The stem is grey in the older parts and light brown in younger parts. The crown is usually roughly conical and quite dense. In large trees the lower branches droop downwards. Spur shoots are common. The wood has a light coloring and a straight grain. The leaves are 7–20 cm long with a glossy dark green upper side and glaucous light grey-green underside; larger leaves, up to 30 cm long, may be produced on stump sprouts and very vigorous young trees. The leaves are alternate, elliptic with a crenate margin and an acute tip, and reticulate venation (see leaf terminology). The petiole is reddish. The buds are conical, long, narrow and sticky, with a strong balsam scent in spring when they open. P. trichocarpa has an extensive and aggressive root system, which can invade and damage drainage systems. Sometimes the roots can even damage the foundations of buildings by drying out the soil.

Thrive on the ash flats from Mt. St. Helens