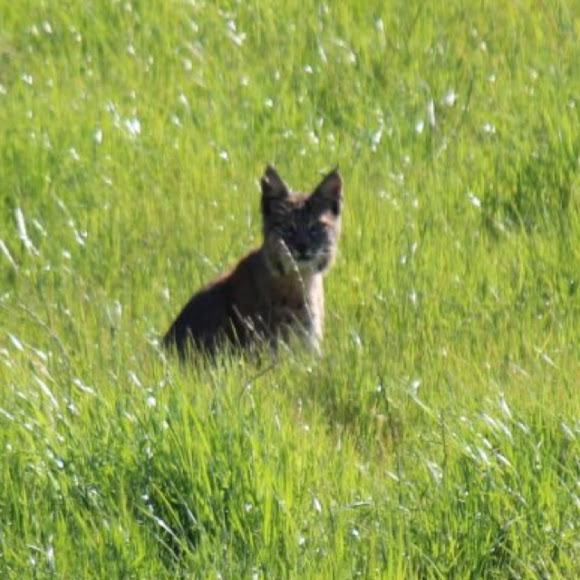 The bobcat (Lynx rufus) is a North American mammal of the cat family Felidae, appearing during the Irvingtonian stage of around 1.8 million years ago (AEO).[3] With 12 recognized subspecies, it ranges from southern Canada to northern Mexico, including most of the continental United States. The bobcat is an adaptable predator that inhabits wooded areas, as well as semidesert, urban edge, forest edges, and swampland environments. It persists in much of its original range, and populations are healthy. With a gray to brown coat, whiskered face, and black-tufted ears, the bobcat resembles the other species of the mid-sized Lynx genus. It is smaller on average than the Canada lynx, with which it shares parts of its range, but is about twice as large as the domestic cat. It has distinctive black bars on its forelegs and a black-tipped, stubby tail, from which it derives its name. Though the bobcat prefers rabbits and hares, it will hunt anything from insects, chickens, and small rodents to deer. Prey selection depends on location and habitat, season, and abundance. Like most cats, the bobcat is territorial and largely solitary, although with some overlap in home ranges. It uses several methods to mark its territorial boundaries, including claw marks and deposits of urine or feces. The bobcat breeds from winter into spring and has a gestation period of about two months. Although bobcats have been hunted extensively by humans, both for sport and fur, their population has proven resilient. The elusive predator features in Native American mythology and the folklore of European settlers. Data compliments of Wikipedia.

A bobcat in urban surroundings: The species' range does not seem to be limited by human populations, as long as it can still find a suitable habitat. The bobcat is an adaptable animal. It prefers woodlands—deciduous, coniferous, or mixed—but unlike the other Lynx species, it does not depend exclusively on the deep forest. It ranges from the humid swamps of Florida to desert lands of Texas or rugged mountain areas. It will make its home near agricultural areas, if rocky ledges, swamps, or forested tracts are present; its spotted coat serves as camouflage.[27] The population of the bobcat depends primarily on the population of its prey; other principal factors in the selection of habitat type include protection from severe weather, availability of resting and den sites, dense cover for hunting and escape, and freedom from disturbance.[9] The bobcat's range does not seem to be limited by human populations, as long as it can find a suitable habitat; only large, intensively cultivated tracts are unsuitable for the species.[25] The animal may appear in back yards in "urban edge" environments, where human development intersects with natural habitats.[52] If chased by a dog, it will usually climb up a tree.[27] The historical range of the bobcat was from southern Canada, throughout the United States, and as far south as the Mexican state of Oaxaca, and it still persists across much of this area. Range maps typically show a pocket of territory in the US Midwest and parts of the Northeast, where it is no longer thought to exist, including southern Minnesota, eastern South Dakota and much of Missouri, mostly due to habitat changes from modern agricultural practices.[13][25][27] While thought to no longer exist in western New York and Pennsylvania, multiple confirmed sightings of bobcats (including dead specimens) have been recently reported in New York's Southern Tier and in central New York.[53] In addition, bobcats sightings have been confirmed in northern Indiana, and one was recently killed near Albion, Michigan.[54] In early March, 2010, a bobcat was sighted (and later captured by animal control authorities) in a parking garage in downtown Houston, TX.[55] In August and September, 2010, a number of sightings were reported in the Houston suburbs of Pearland and Friendswood. Its population in Canada is limited due to both snow depth and the presence of the Canadian lynx. The bobcat does not tolerate deep snow, and will wait out heavy storms in sheltered areas;[56] it lacks the large, padded feet of the Canadian lynx and cannot support its weight on snow as efficiently. The bobcat is not entirely at a disadvantage where its range meets that of the larger felid: displacement of the Canadian lynx by the aggressive bobcat has been observed where they interact in Nova Scotia, while the clearing of coniferous forests for agriculture has led to a northward retreat of the Canadian lynx's range to the advantage of the bobcat.[25] In northern and central Mexico, the cat is found in dry scrubland and forests of pine and oak; its range ends at the tropical southern portion of the country.[25]

This bobcat was photographed in a rural, but semi populated area near highway 70 in N. California. I shot 18 images in sport mode with a long lens. Being, downwind, the cat was totally unaware of my presence. My calculation of distance was about 75 yards. She looked pregnant and plump, and was actively hunting before spotting the reflection of my lens and she ran off. My guess being so close to residences was the ease of raiding chicken coops and possibly smaller domesticated critters. Shot off like a rocket when spotted. One of my best stalk photos ever.