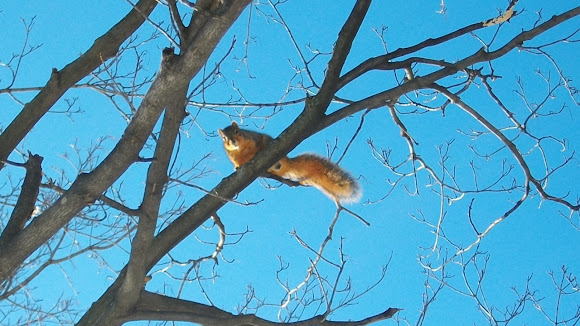 Fox squirrels that nest in my neighborhood. I watched the male chase around a neighboring male this morning, I'm not sure if it was playful or if they were having a dispute of dominance, but there was a lot of aggressive tail flicking. I lived with eastern grays when I was younger, and I know they did that when they're angry. The large female sat in the tree, casually watching the entire ordeal until the other male was finally gone. I went down after to take some photos of tracks and get some pics of the squirrels who were without cover and due to the cold, very lethargic. The male's hormone levels must have still been spiking as a result of his dispute, because he even came down the tree a bit toward me and gave off some formidable grunts which I immediately recognized as 'Back off buddy'. I would love to do more research and do an extensive study on the sexual habits of squirrels. Obviously a lot of chasing is involved, this I know for sure, and it pays to be better leaper. The track pics I took are interesting you can make out the width of the body, fox squirrels put all of their weight concentrated on their hinds and keeping their forelimbs tucked closely in when they stride, this opposed to the grays who like to sprawl out slightly on their front paws when they run. The gallop pattern is wide, as expected, not only adapted for snow travel but because the squirrel itself is quite larger than it's local cousins. In the last photo you can make out paw print.