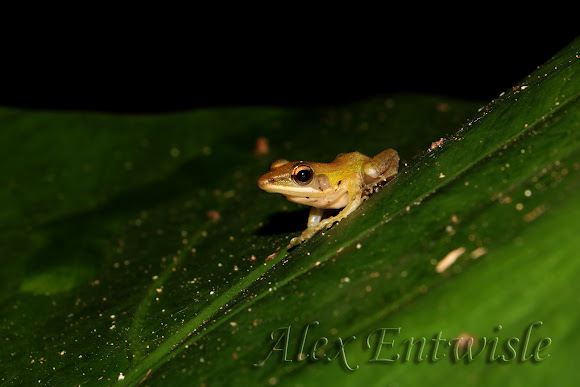 This species of frog, possibly a sub species of reed frog, was found near a mountain stream in the middle of the jungle in south Sumatra. The most identifiable features of this frog are their pale yellow skin with a brighter yellow stripe on either side of their body. Without actually measuring the frog it seemed that it was no larger than 3cm in length from the tip of its head to the bottom of its hip. The frog was possibly 5 cm in length from head to toe. It also has Large tympanum on either side of its head.

This frog was found in high humidity on January the 20th 2017. It was night when I found this species and it had been torrentially raining during the day so humidity was high. Whilst walking through the jungle I could hear high pitched chirping coming from a stream near the path, this is when I noticed the frogs. Getting as close to the frogs as I could I took many pictures as can be seen above. I saw this species a couple of times however the night I took this picture, this frog species was not alone. This was the night that I saw what resembled to be a green pit viper Trimeresurus albolabris. It’s highly likely that this is one of their main predators, as after this night I did not see this frog species in that spot again.

I've been asking a lot of reptile and amphibian specialists about this guy and there is no knowledge of him at all, so I'm really hoping you guys can help. He was found in an area of rain forest that is generally un-explored and the nearest village has only actually been a village for the past 8 years. So it's possible that this species has never seen identified.