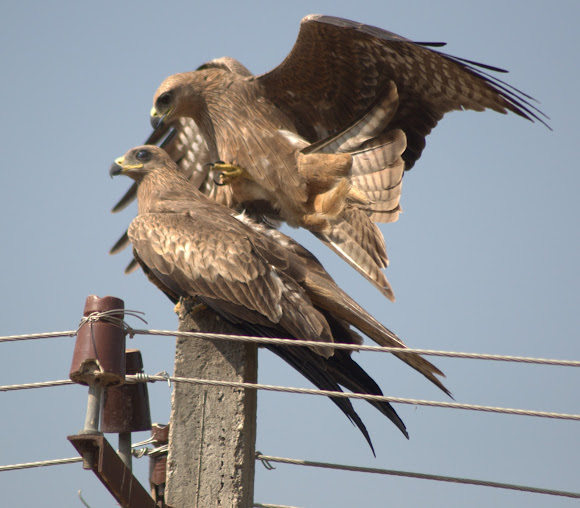 Black kites can be distinguished from red kites by the slightly smaller size, less forked tail (visible in flight), and generally dark plumage without any rufous. The sexes are alike. The upper plumage is brown but the head and neck tend to be paler. The patch behind the eye appears darker. The outer flight feathers are black and the feathers have dark cross bars and are mottled at the base. The lower parts of the body are pale brown, becoming lighter towards the chin. The body feathers have dark shafts giving it a streaked appearance. The cere and gape are yellow, but the bill is black (unlike in the yellow-billed kite). The legs are yellow and the claws are black. They have a distinctive shrill whistle followed by a rapid whinnying call. Males and females have the same plumage but females are longer than males. Their wingspan is around 150 cm

In & around water body.

Your spotting has been nominated for the Spotting of the Week. The winner will be chosen by the Project Noah Rangers based on a combination of factors including: uniqueness of the shot, status of the organism (for example, rare or endangered), quality of the information provided in the habitat and description sections. There is a subjective element, of course; the spotting with the highest number of Ranger votes is chosen. Congratulations on being nominated Ravi!