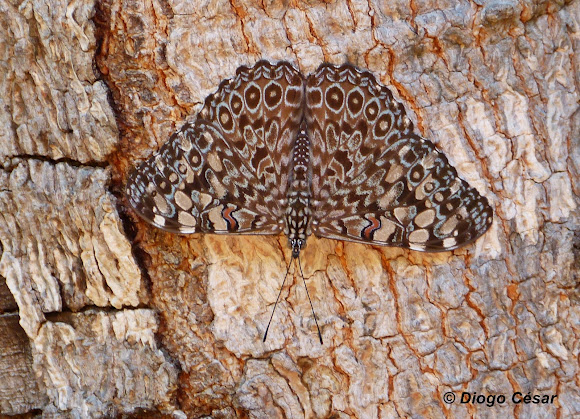 Habitats This species is found in rainforest and deciduous forest habitats at altitudes between 0-1400m. Lifecycle The caterpillar when fully grown is bluish-black, with whitish dots and a reddish lateral line, and has multi-branched spines that are black except for those on the middle section which are yellow. There is also apparently another form which is greyish-green colour marked with a pale greenish broken lateral line. They larvae feed gregariously on the vines Dalechampia triphylla or D. stenosepala depending on location. The chrysalis strongly resembles a small withered leaf. It varies in colour from green to dark brown, and has a pair of long flattened wavy head horns. Hamadryas feronia, Rio Madre de Dios, Peru Adult behaviour Hamadryas feronia is often seen basking on tree trunks, adopting a head-downward posture with the wings flattened against the bark. Males bask in this position for long periods to await potential mates. They commonly settle at a height of about 2m but if disturbed immediately take flight. After a few seconds they resettle, usually higher up on the same tree trunk. They remain there until the threat passes, after which they descend the trunk in a series of short flights, dropping lower each time until after several minutes they resume their original position. The butterflies are active from sunrise to sunset, and are rarely seen away from tree trunks, but also sometimes bask on rock faces or tree foliage.