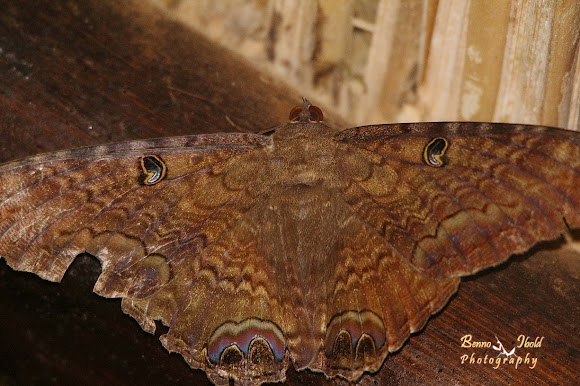 Ascalapha odorata is a large bat-shaped, dark-colored nocturnal moth. Males can attain a wingspan of 16 cm. The dorsal surfaces of their wings are mottled brown with hints of iridescent purple and pink, and, in females, crossed by a white bar. [Males lack this bar.] The diagnostic marking is a small spot on each forewing shaped like a number nine or a comma. This spot is often green with orange highlights. Females are somewhat smaller, reaching 12 cm in width, and lighter in color. The larva is a large caterpillar up to 7 cm in length with intricate patterns of black and greenish brown spots and stripes.

The black witch moth is found throughout Central America and Mexico, with its distribution extending from Brazil to the southern United States. It is the largest noctuid found in the continental United States, Adults feed on overripe rainforest fruit, especially bananas, and larvae consume the leaves of plants. Most of its host plants are legumes. It favors Acacia species, Kentucky Coffeetree (Gymnocladus dioicus), and Candle Bush (Senna alata). It attacks mesquite and edible fig, and can be an agricultural pest. The moth undertakes a northward migration during the late spring and summer, moving up through Central America and entering the northern reaches of its range. During this season individual adults and masses of larvae can be found from Texas to Florida. It is also found in Hawaii, but it is not native to the islands.