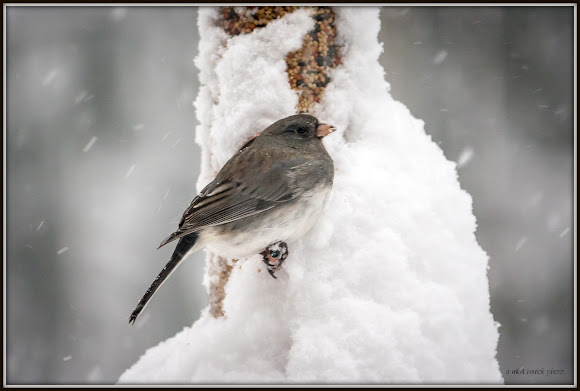 The Dark-eyed Junco is the best-known species of the juncos, a genus of small grayish American sparrows. This bird is common across much of temperate North America and in summer ranges far into the Arctic.

Their breeding habitat is coniferous or mixed forest areas throughout North America. In winter, juncos are familiar in and around towns, and in many places are the most common birds at feeders. These birds forage on the ground. In winter, they often forage in flocks that may contain several subspecies. They mainly eat insects and seeds. (from Wikipedia)

Come late fall and into winter, we always have at least several of these birds hanging around our feeder. They don't always perch on the feeder until the snow gets deep. More often they look for fallen seed on the ground. They often take shelter under our deck where it is cave-like for them.