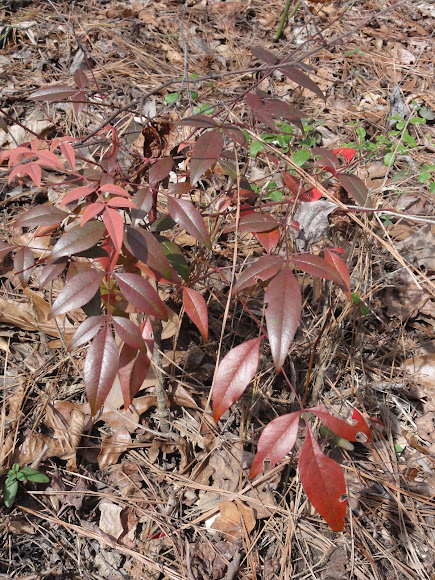 Despite the common name, it is not a bamboo but an erect evergreen shrub up to 2 m (7 ft) tall by 1.5 m (5 ft) wide, with numerous, usually unbranched stems growing from ground level. The glossy leaves are sometimes deciduous in colder areas, 50–100 cm (20–39 in) long, bi- to tri-pinnately compound, with the individual leaflets 4–11 cm (2–4 in) long and 1.5–3 cm broad. The young leaves in spring are brightly coloured pink to red before turning green; old leaves turn red or purple again before falling. The flowers are white, borne in early summer in conical clusters held well above the foliage. The fruit is a bright red berry 5–10 mm diameter, ripening in late autumn and often persisting through the winter. Introduced from Eastern Asia and India in the early 1800s. Widely planted as an ornamental, now escaped and spreading from around old homes and recent landscape plantings. Sterile-seeded, reddish cultivars available.

Occurs under forest canopies and near forest edges. Shade tolerant. Seedlings frequent in vicinity of old plantings. Varying leaf colors in the various cultivars, some of which do not produce viable seeds. Colonizes by root sprouts and spreads by animaldispersed seeds. Found throughout the region with dense infestations in TN and LA. Mostly occurs in the north and west portions of the region and spreading southeast.