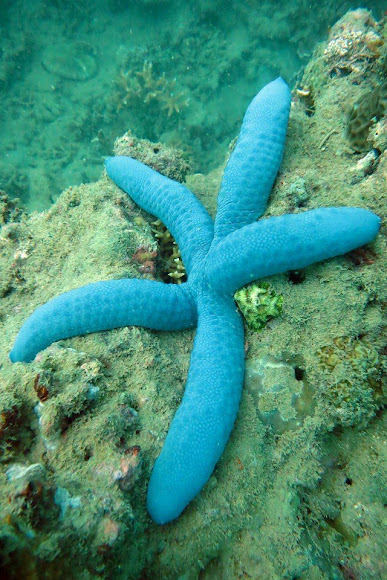 Linckia laevigata (sometimes called the "blue Linckia" or Blue Star) is a species of sea star (commonly known as a starfish) in the shallow waters of tropical "Indo-Pacific" (a biogeographic region of the Earth's seas, comprising the tropical waters of the Indian Ocean, the western and central Pacific Ocean, and the seas connecting the two in the general area of Indonesia). The variation ("Polymorphism", in this case, a "color morph") most commonly found is pure, dark or light blue, although observers find the aqua, purple or orange variation throughout the ocean. These sea stars may grow up to 30 cm in diameter, with rounded tips at each of the arms — some individuals may bear lighter or darker spots along each of their arms. Individual specimens are typically firm in texture, possessing the slightly tubular, elongated arms common to most of other members of the family Ophidiasteridae, and usually possessing short, yellowish tube feet. An inhabitant of coral reefs and sea grass beds, this species is relatively common and is typically found in sparse density throughout its range. Blue Stars live subtidally, or sometimes intertidally, on fine (sand) or hard substrata and move relatively slow.