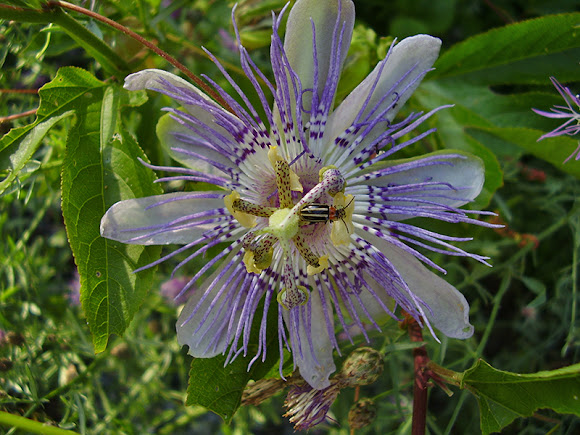 Purple passionflower produces large, elaborate flowers. There are five stamens and a pistil with three stigmas (picture 1). The anthers and stigmas point downward to contact pollinators such as bumblebees as they crawl beneath them, looking for nectar (picture 2). The pollinated flower develops into an oval fruit (picture 3). Some bumblebees get to the nectar of flower buds by drilling into them (picture 4) without carrying out their duty as a pollinator. Animals that damage buds this way (whether they can act as pollinators or not) are called nectar robbers. Other insects attracted to passionflowers include a variety of beetles such as the three-lined potato beetle, Lema daturaphila (picture 1), and the varied carpet beetle, Anthrenus verbasci (picture 4).

Roadsides, meadows, disturbed areas, along train tracks. This spotting occurred along where train tracks used to run in what is now High Bridge Trail State Park.

That's a three-lined potato beetle, Lema daturaphila. There were dozens or hundreds of passion flowers blooming that day, and many of them had several of these beetles on them. If I haven't posted it as a separate spotting, I'll fix that soon.

drP I'm interested with the bug on the first photo, any info on that? Thanks!