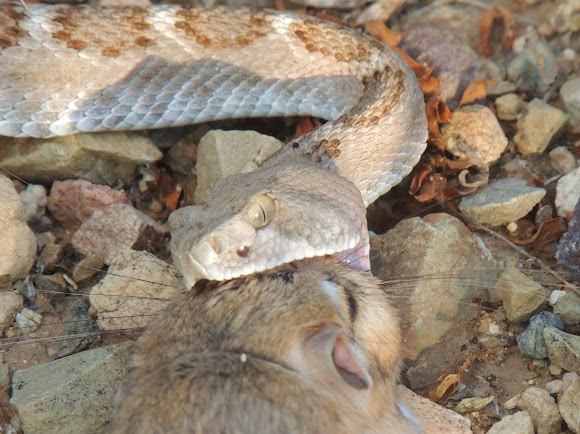 My trail highlight of the day. I found this small Western Diamondback during this morning's hike right on the trail. He was maybe less than two feet in length and was sitting next to a kill he had apparently just made when I approached. His meal: a Merriam's Kangaroo rat. He stayed next to the rat for a while before sizing it up to start to consume it. I have seen plenty of rattlesnakes but never one who had just made a kill and was about to eat. I watched for a while and took a little video. But I didn't stay for the entire show. And my camera died. On my way back to the trail head I checked to see if he might be digesting off trail near where I spotted him. But he was no where to be found. About 3 hours had passed anyway, so I knew that I wouldn't likely see him again anyway.

Amazing series Wandering Naturalist and what a cool experience! Thank you for sharing :)