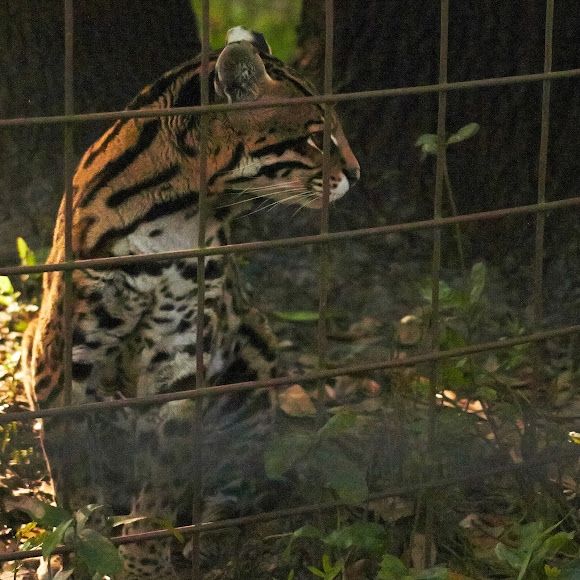 This cat is probably the best known of the South American cats because of its pelt being the mainstay of the fur trade, and for the fact that it was frequently kept as a pet. Due the fact that Ocelots are high strung, unpredictable, comedic little cats, humans de-fanged, de-clawed, de-scented, and altered these cats in order to make them conform to the “pet” industry. Like all exotic cats, these creatures, male or female, altered or not, spray a foul smelling urine on everything they wish to mark as theirs including their keepers. In the 1980’s, Ocelot fur coats sold for $40,000.00 and the live animal as a pet sold for $800.00. At one time, more than 200,000 ocelots per year were killed for their coats. Today, with laws prohibiting hunting for the fur trade, there are no Ocelot coats for sale, and the “pet” Ocelot is a thing of the past.

The Ocelot is found in very diverse habitats including rain forest, montane forest, thick bush, semi-deserts, coastal marsh, and along river banks, but it is never found in open country.

Amazing Grace was reported to be a three-year-old female ocelot when she arrived on 9/27/96, but appears to be much older. Her ears were very tattered because the place where she lived before had cats with common walls; meaning that one wall of the cage was shared between adjoining cats. When Amazing Grace would rub against the wire, the cat next to her would bite off pieces of her ears trying to get a grip on her. She is safe from harm now and has her own large natural enclosure. She is affectionately called Gracie by the volunteers at Big Cat Rescue. Gracie has the boldest personality of all the ocelots. She makes her presence known with her guttural voice and greets everyone with enthusiasm. Gracie is also very high strung and loves attention of all sorts, especially operant training sessions. Gracie gets so excited during training sessions and does not want them to end or the keepers to leave. So when keepers end an operant session they must leave behind some enrichment for her to play with. This way Gracie can keep entertaining herself for as long as she wants.