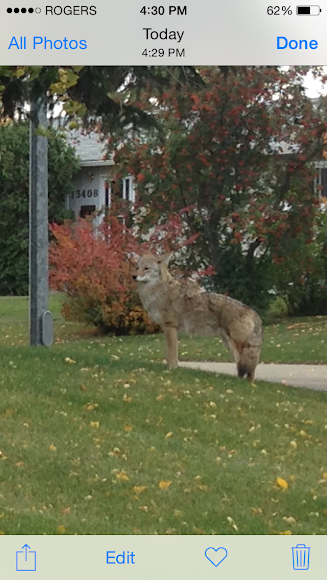 The coyote first found in open prairies and deserts. Now because of their changing environment, coyotes are commonly found in the north american forests and mountains. They now even colonize most major cities. Coyotes are content to eat almost anything, hunting rabbits, rodents, fish, frogs and even deer. They have also been know to happily dine on snakes, insects, grass, and fruit. A male Coyote can vary between from 38-42 inches long from head to tail, with there weight between 20-50lbs. Their average lifespan is 14 human years. Coyotes depending on their type can have reddish brown, white, brown, black, and even orange fur. Another species that shares the same environment is elk. Elk are sometimes hunted by packs of coyotes, but because of the coyotes small size this rarely occurs. Coyotes are known to hunt alongside of badgers. Badgers and coyotes work together they hunt down smaller prey such as prairie dogs and ground squirrels. Coyotes normally hunt their prey when it is above ground and the badger usually takes over when their prey burrows underground. This symbiotic relation is called mutualism, since both species prosper from this relation. For the past 150 years Coyotes have been prospering where other predators have been failing. The reasoning is that coyotes have evolved to eat anything that it can get. Things that wolves wouldn't think about. They have evolved to be able to digest human waste. Left overs and other garbage. Another way they have adapted is there habit of being quite sneaky, Coyotes can be living in your community unnoticed for months because they are considered a pest and it is legal in most places to shoot them if they're on your property. Female coyotes are only fertile for 2 months of the year, and male coyotes are sterile for 8 months. Coyotes conceive between early February till late March. Females usually give birth to a litter of between six to eight pups. They have a sexual reproduction system. females choose there mate with a complex howling duet.