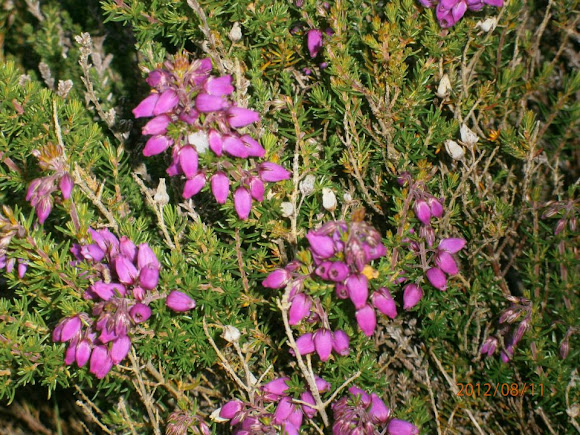 Calluna vulgaris (known as common heather, ling, or simply heather)[1] is the sole species in the genus Calluna in the family Ericaceae. It is a low-growing perennial shrub growing to 20 to 50 centimetres (7.9 to 19.7 in) tall, or rarely to 1 metre (39 in) and taller,[2] and is found widely in Europe and Asia Minor on acidic soils in open sunny situations and in moderate shade

It is the dominant plant in most heathland and moorland in Europe, and in some bog vegetation and acidic pine and oak woodland. It is tolerant of grazing and regenerates following occasional burning, and is often managed in nature reserves and grouse moors by sheep or cattle grazing, and also by light burning.