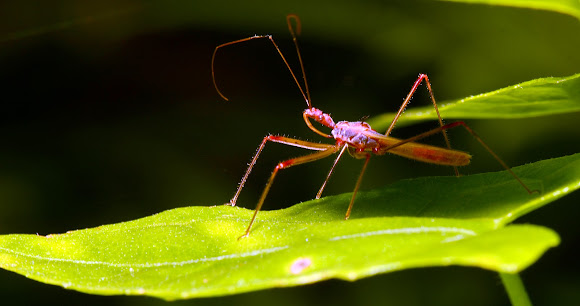 Adult insects range from about 4.0 to 40 mm, depending on the species. They most commonly have an elongated head with a distinct narrowed 'neck', long legs, and prominent, segmented, tubular mouthparts, most commonly called the proboscis, but some authors use the term "rostrum". Most species are bright in color with hues of brown, black, red, or orange. The most distinctive feature of the family is that the tip of the rostrum fits into a groove in the prosternum, where it may be used for stridulation by rasping it against ridges in the groove. The structure of ridges is a stridulitrum, or stridulatory organ to produce sound, a tactic often used to discourage predators. If harassment continues, many species can deliver a painful stab with the proboscis, injecting venom or digestive juices. The effects can be intensely painful and the injection from some species may be medically significant.

Predatory Reduviidae use the long rostrum to inject a lethal saliva that liquefies the insides of the prey, which are then sucked out. The saliva contains enzymes that digest the tissues they swallow. This process is generally referred to as extraoral digestion. The saliva is commonly effective at killing prey substantially larger than the bug itself. The legs of some Reduviidae have areas covered in tiny hairs that aid in holding onto their prey while they feed. Others, members of the subfamily Phymatinae in particular, have forelegs that resemble those of the praying mantis, and they catch and hold their prey in a similar way to mantises.