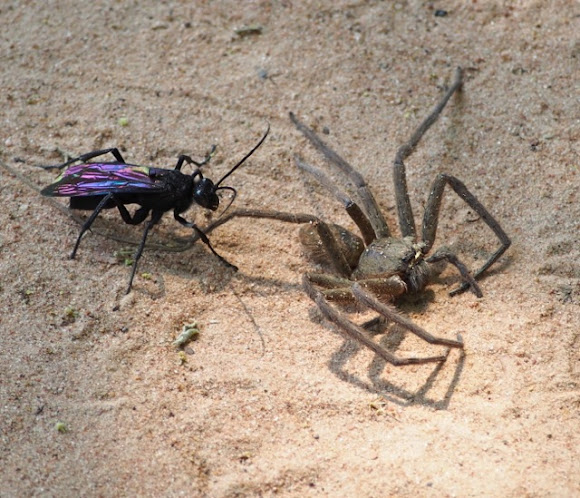 A tarantula hawk is a spider wasp which hunts tarantulas as food for its larvae. Tarantula hawks belong to any of the many species in the genera Pepsis and Hemipepsis in the family Pompilidae (spider wasps). The stinger of a female tarantula hawk can be up to 7 mm (1/3 in) long, and the sting is considered the second most painful insect sting in the world. The female tarantula hawk captures, stings, and paralyzes the spider, then either drags her prey back into her own burrow or transports it to a specially prepared nest, where a single egg is laid on the spider’s abdomen, and the entrance is covered. When the wasp larva hatches, it creates a small hole in the spider's abdomen, then enters and feeds voraciously, avoiding vital organs for as long as possible to keep the spider alive. After several weeks, the larva pupates. The male tarantula hawk does not hunt; instead, it feeds off the flowers of milkweeds, western soapberry trees, or mesquite trees (females feed on these same plants, as well). The male tarantula hawk has a behavior called hill-topping, where he sits atop tall plants and watches for passing females ready to reproduce.

This poor spider had just been stung. When I arrived the wasp was running around madly searching for where it had fallen. I was on the scene, waiting for it to stop to take a photograph, when it found it's prey.