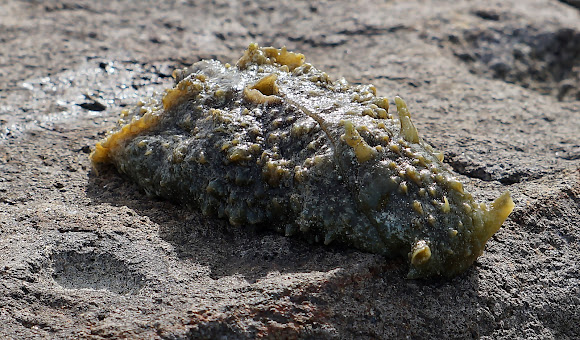 Sea hares are mostly rather large, bulky creatures. The biggest species, Aplysia vaccaria, can reach a length of 75 centimetres (30 in) and a weight of 14 kilograms (31 lb) and is arguably the largest gastropod species. Sea hares have soft bodies with an internal shell, and like all opistobranch mollusks they are hermaphroditic. Unlike many other gastropods, they are more or less bilaterally symmetrical in their external appearance. The foot has lateral projections, or "parapodia".

Sea hares are herbivorous, and are typically found on seaweed in shallow water. It seems to be the case that some young sea hares are capable of burrowing in soft sediment leaving only their rhinophores and mantle opening showing. Sea hares have an extremely good sense of smell. They can follow even the faintest scent using their rhinophores, which are extremely sensitive chemoreceptors. Their color corresponds with the color of the seaweed they eat: red sea hares have been feeding on red seaweed.[5] This camouflages them from predators. When disturbed, a sea hare can release ink from its ink glands, providing a potent deterrent to predators. This release acts as a smoke screen, while at the same time, adversely affecting the smell sensors of their predators. In a small environment, this ink could be toxic to the inhabitants. The color of the ink is white, purple or reddish, depending on the color of the pigments in their seaweed food source. Their skin contains a similar toxin that renders sea hares largely inedible to many predators.[citation needed] Some sea hares can employ jet propulsion as a locomotory method, although without the sophisticated cognitive machinery of the cephalopods their motion is somewhat erratic.