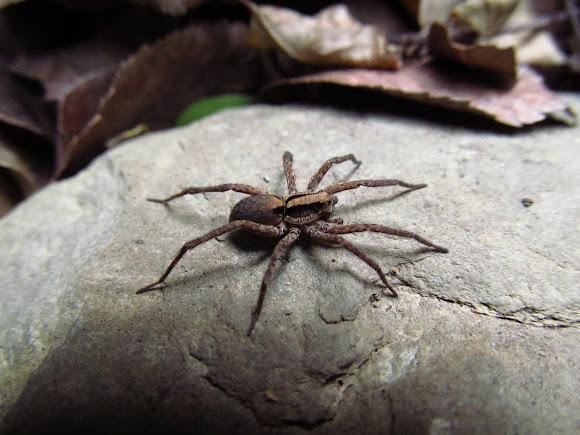 Wolf spiders are members of the family Lycosidae, from the Ancient Greek word "λύκος" meaning "wolf". They are robust and agile hunters with excellent eyesight. They live mostly solitary lives and hunt alone. Some are opportunistic hunters pouncing upon prey as they find it or even chasing it over short distances. Some will wait for passing prey in or near the mouth of a burrow. They are quite poisonous and if bitten could cause serious damage they can grow up to the size of a dinner plate and are mostly found in new zealand in forested areas. Wolf spiders resemble Nursery web spiders (family Pisauridae), but wolf spiders carry their egg sacs by attaching them to their spinnerets (Pisauridae carry their egg sacs with their chelicerae and pedipalps). Two of the Wolf spider's eight eyes are large and prominent, which distinguishes them from the Nursery web spiders whose eyes are all of approximately equal size. This can also help distinguish them from grass spider.

Wolf spiders can be found in a wide range of habitats both coastal and inland. These include shrublands, woodland, wet coastal forest, alpine meadows, and suburban gardens. Spiderlings disperse aerially and consequently wolf spiders have wide distributions. Although some species have very specific microhabitat needs (such as stream-side gravel beds or montane herb-fields) most are wanderers without permanent homes. Some build burrows which can be left open or have a trapdoor (depending on species). Arid zone species construct turrets or plug their holes with leaves and pebbles during the rainy season to protect themselves from flood waters.