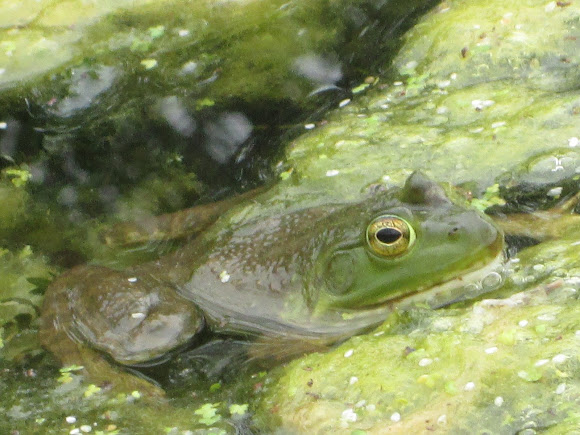 The American bullfrog (Rana catesbeiana), often simply known as the bullfrog in Canada and the United States, is an aquatic frog, a member of the family Ranidae, or “true frogs”. This frog has an olive green back and sides blotched with brownish markings and a whitish belly spotted with yellow or grey. The upper lip is often bright green and males have yellow throats. It inhabits large, permanent water bodies, such as swamps, ponds, and lakes, where it is usually found along the water's edge. The male bullfrog defends a territory during the breeding season. His call is reminiscent of the roar of a bull, which gives the frog its common name. This frog is native to southern and eastern parts of the United States and Canada, but has been widely introduced across other parts of North, Central and South America, Western Europe, and parts of Asia, and in some areas is regarded as an invasive species. The bullfrog is harvested for use as food in North America and in several countries into which it has been introduced. It is also cultured in controlled environments, though this is a difficult and not always successful undertaking. Some international trade in frog legs occurs for human consumption. Bullfrogs are used in biology classes in schools for dissection and are sometimes kept as pets.

Hello tierra ammirata and Welcome to the Project Noah community! We hope you like the website as much as we do. There are many aspects to the site and community. The best way to get started is to read the FAQs at http://www.projectnoah.org/faq where you can find all the tips, advice and "rules" of Project Noah. You, like the rest of the community, will be able to suggest IDs for species that you know (but that have not been identified), and make useful or encouraging comments on other users' spottings (and they on yours).
There are also "missions" you can join and add spottings to. See http://www.projectnoah.org/missions . A mission you should join is the http://www.projectnoah.org/missions/2004... to chose the best wild photo of 2016,only the spottings added to that mission are eligible.Note that most missions are "local". Be sure not to add a spotting to a mission that was outside of mission boundaries or theme :) Each mission has a map you may consult showing its range. We also maintain a blog archive http://blog.projectnoah.org/ where we have posted previous articles from specialists from different geographical areas and categories of spottings, as well as wildlife "adventures".
So enjoy yourself, share, communicate, learn. See you around :)