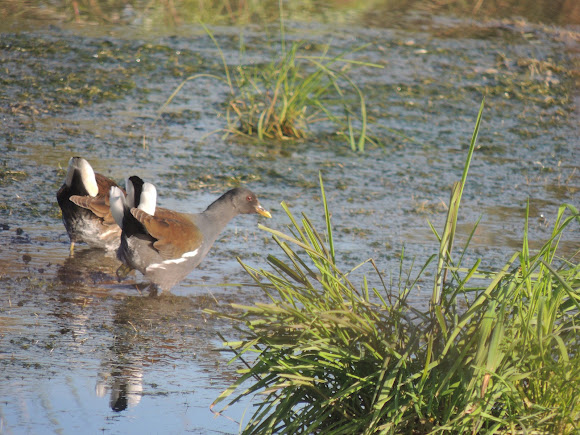 The moorhen is a distinctive species, with dark plumage apart from the white undertail, yellow legs and a red frontal shield. The young are browner and lack the red shield. The frontal shield of the adult has a rounded top and fairly parallel sides; the tailward margin of the red unfeathered area is a smooth waving line. In the related common gallinule of the Americas, the frontal shield has a fairly straight top and is less wide towards the bill, giving a marked indentation to the back margin of the red area.

The common moorhen lives around well-vegetated marshes, ponds, canals and other wetlands. The species is not found in the polar regions or many tropical rainforests. Elsewhere it is likely the most common rail species, except for the Eurasian coot in some regions