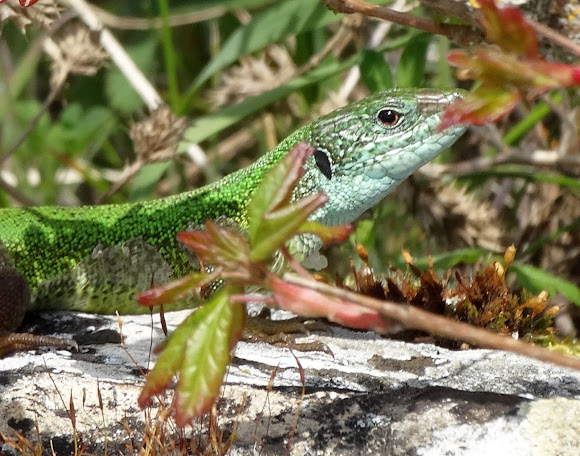 A male European green lizard. The European green lizard (Lacerta viridis) is a large lizard distributed across European midlatitudes from Slovenia and eastern Austria to as far east as the Black Sea coasts of Ukraine and Turkey. It is often seen sunning on rocks or lawns, or sheltering amongst bushes. The male has a larger head and a uniform green coloring punctuated with small spots that are more pronounced upon its back. The throat is bluish in the adult male and to a lesser extent in the female.

On a rock in a meadow at mount Chortiatis (Thessaloniki, Greece). The European green lizard is native to southeastern Europe. Its range extends from southern Germany, Austria, eastern Italy, the former Yugoslav Republic and Greece to southern Ukraine, Romania, Bulgaria and western Turkey. It is known from elevations up to 2,200 m (7,218 ft) above sea level and its typical habitat is dense bushy vegetation in open woodland, hedgerows, field margins, embankments and bramble thickets. In the northern part of its range it may be found on bushy heathland and in the southern part it prefers damp locations.