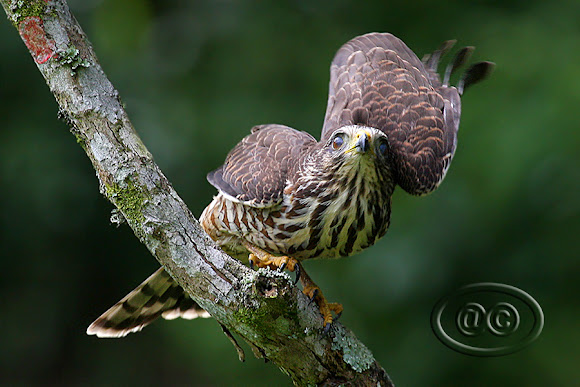 The roadside hawk is 31–41 cm (12–16 in) long and weighs 250–300 g (8.8–10.6 oz). Males are about 20% smaller than females, but otherwise the sexes are similar. In most subspecies, the lower breast and under parts are barred brown and white, and the tail has four or five grey bars. Twelve subspecies are usually recognised and there is significant plumage variation between these. Depending on the subspecies involved, the roadside hawk is mainly brown or grey. It is fairly common to observe a touch of rufous (i.e., a light reddish-brown) on the bird's wings, especially when seen in flight. Its call is a very high-pitched piercing squeak. The eyes of adult roadside hawks are whitish or yellow. As suggested by its specific name (magni = large; rostri = beak), its beak is relatively large.
The roadside hawk may be marginally the smallest hawk in the widespread genus Buteo, although Ridgway's hawk and the white-rumped hawk are scarcely larger. In flight, the relatively long tail and disproportionately short wings of the roadside hawk are distinctive. It frequently soars, but does not hover.

It occurs from Mexico to Argentina and Brazil. It is one of the most common species of our country, occurring in all states, inhabiting the most varied environments: fields, forest edges, urban areas, etc., is more rare in densely forested areas.
In recent decades this hawk has become more common in urban centers, adapting successfully to this environment because in the cities the supply of prey is greater and their natural predators (other larger birds of prey) are scarce.