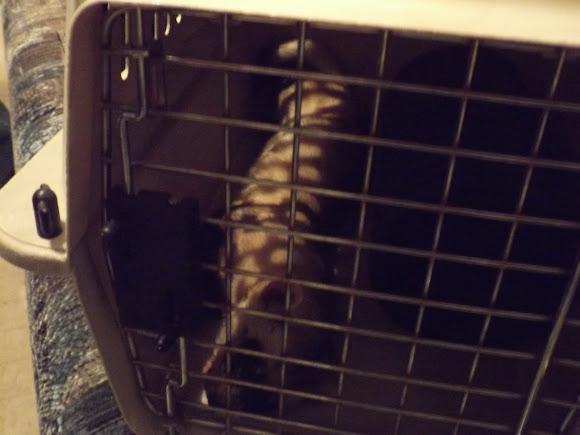 This one was captured in the Aubrey Valley which is primarily desert grassland.

This was the only animal captured by an army of volunteers and biologists in the two days I spent spotlighting. At the moment of my photo, it was under anesthesia and was slowly recovering. I did not use flash so as not to agitate it. The Black-footed Ferret is an extremely endangered mammal that is native to grasslands in the west US.

Wow! You had a ferret party!

We only caught 2 when I did it, but saw 4 others we couldn't catch. One even popped up in a burrow about 5 ft away while I was talking to someone, and stayed long enough for me to get a cell phone photo!

Hopefully lots more are still hunkered down in the burrows and will be running around during the fall survey!

I would love to do this again, thanks again for the recommendation!

I know. Jennifer Cordova was in charge. She was not happy about the results. Only one other ferret was seen out of everyone. I hope that the Badgers haven't eaten them near to extinction!

Awesome you got to see one, but I can't believe this is the ONLY one caught during the survey! That doesn't seem like a good sign :/

If it's not too far, do the fall survey as well! I would think they would be more active then