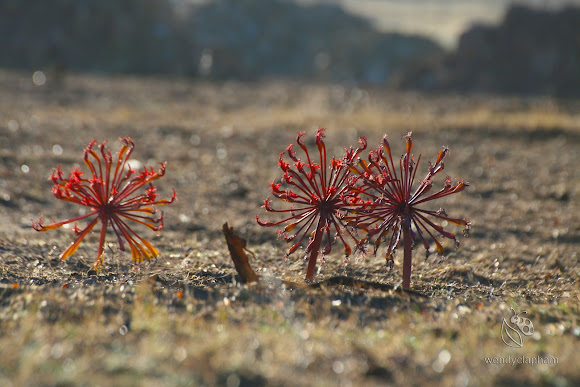 A large bulbous perennial from which flowers emerge between February and March. The flowerhead forms a huge sphere, up to 600 mm in diameter, with between 20 to 80 flowers. These are large, 6-tepalled, pink to red and are soon followed by the 3-sided seed capsules. The leaves appear from about May, after the flowerhead has dried and broken off. There are generally 6 large tongue-shaped leaves spread flat on the ground. The margins are often fringed. Leaves start to die down from about October and the bulb lies dormant during summer.

These plants occur on sandy lowland coastal areas from southern Namaqualand to the Cape Peninsula and Plettenberg Bay.

Some of the names refer to flowering time, while others such as rolbossie and perdespookbossie refer to the inflorescence which tumbles (rol) along and which may spook horses (perde) in so doing! Apparently if you stared long enough at the flower you got sore eyes, hence the name sore-eye flower! A more likely explanation is that pollen in the eyes would account for the irritation. These plants have a toxic principle which prevents them from being eaten by moles and mole rats which tend to be the scourge of many other bulbous plants planted out in the garden. They suffer very few other problems.

Thanks Smith's and Yuko!

Wow!!! You have added so many amazing spots to this mission thank you Wendy!!

How beautiful and interesting!

Thanks all for the comments:)