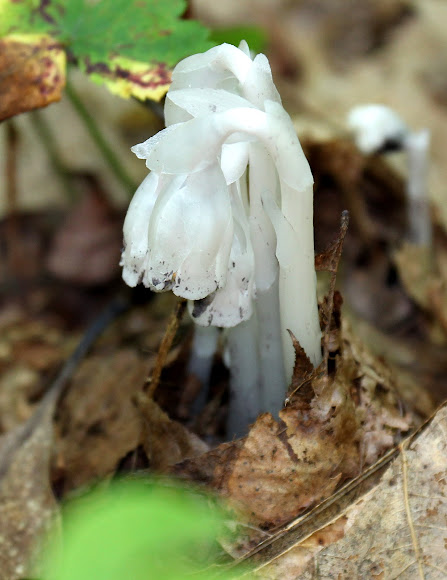 The entire plant is translucent white, sometimes with a pale pink coloration and often has black flecks. The leaves are scale-like and the stem bears a single flower. Upon emerging from the ground, the flower is pendant. As it matures, the flower becomes erect and in line with the stem.

Indian Pipe is a flowering plant, but it isn't green. Unlike most plants, Indian Pipe is white and doesn't contain chlorophyll. It doesn't generate energy from sunlight, and instead is parasitic. Its hosts are fungi that are mycorrhizal with trees, which means that it gets its energy from photosynthetic trees. Since it doesn't depend on sunlight to grow, it can grow in very dark environments, such as in the understory of a forest.

Thanks Steve. I didn't know what it was when I took the picture, but was fascinated by its translucence.