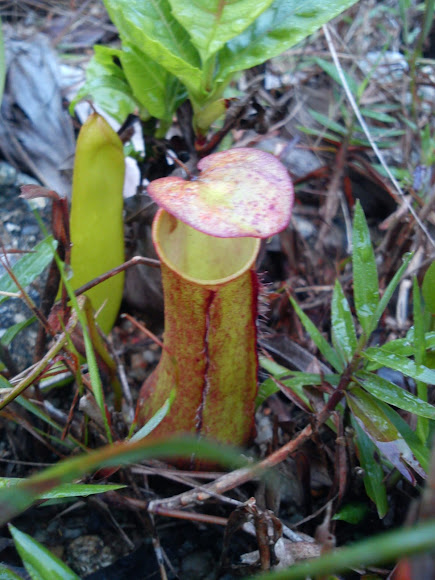 Popularly known as tropical pitcher plants or monkey cups, is a genus of carnivorous plants in the monotypic family Nepenthaceae. It consist of a shallow root system and a prostrate or climbing stem. The trap contains a fluid of the plant's own production, which may be watery or syrupy, and is used to drown the prey. The lower part of the trap contains glands which absorb nutrients from captured prey. Along the upper inside part of the trap is a slick, waxy coating which makes the escape of its prey nearly impossible. Surrounding the entrance to the trap is a structure called the peristome (the "lip") which is slippery and often quite colorful, attracting prey, but offering an unsure footing. Above the peristome is a lid (the operculum); in many species, this keeps rain from diluting the fluid within the pitcher, the underside of which may contain nectar glands which attract prey.

Thanks Daniel Rowson for the ID!