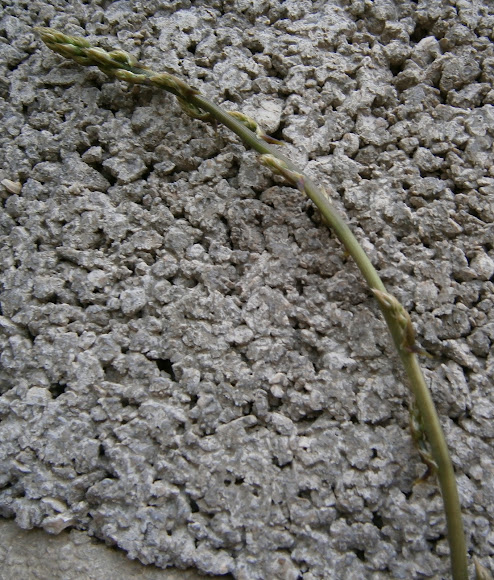 Asparagus is a herbaceous, perennial plant growing to 100–150 centimetres (39–59 in) tall, with stout stems with much-branched feathery foliage. The "leaves" are in fact needle-like cladodes (modified stems) in the axils of scale leaves; they are 6–32 mm (0.24–1.3 in) long and 1 mm (0.039 in) broad, and clustered 4–15 together. The root system is adventitious and the root type is fasciculated. The flowers are bell-shaped, greenish-white to yellowish, 4.5–6.5 mm (0.18–0.26 in) long, with six tepals partially fused together at the base; they are produced singly or in clusters of two or three in the junctions of the branchlets. It is usually dioecious, with male and female flowers on separate plants, but sometimes hermaphrodite flowers are found. The fruit is a small red berry 6–10 mm diameter, which is poisonous to humans.[5]

Plants native to the western coasts of Europe (from northern Spain north to Ireland, Great Britain, and northwest Germany) are treated as Asparagus officinalis subsp. prostratus (Dumort.) Corb., distinguished by its low-growing, often prostrate stems growing to only 30–70 cm (12–28 in) high, and shorter cladodes 2–18 mm (0.079–0.71 in) long.[2][6] It is treated as a distinct species, Asparagus prostratus Dumort, by some authors.[7][8] A remarkable adaptation is the edible asparagus, while in the Macaronesian Islands several species, (A. umbellatus, A. scoparius, etc.), are preserved the original form, a leafy vine; in the Mediterranean, the asparagus genus has evolved into thorny species.