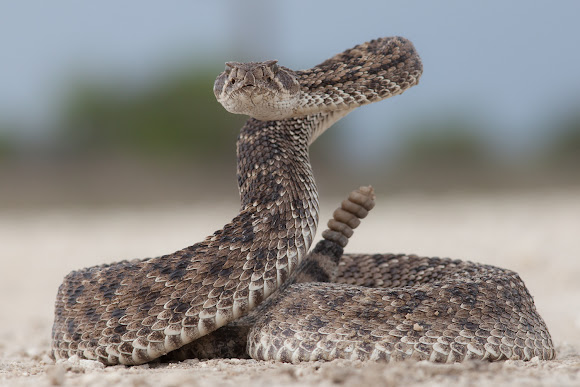 Body length: ~1.5 meters Body weight: up to 6.7 kg. Crotalus atrox has a plump body, short tail, and a broad triangular head. Like all Pit Vipers, it has a pit organ, which is situated in an indentation of the upper jaw, between the nostril and eye. The pit is about 5 mm deep, with an outer and inner chamber separated by a thin membrane. The membrane senses very slight temperature differences between the snake's inner and ambient temperatures. The Western Diamond Rattlesnake also has the self-named rattle on the end of the tail. Each link of the rattle is the remnant of a molted skin; as the snake molts, the last scale loosens but does not fall off. As the snake ages, new rattles are formed with each molt, while old rattles simultaneously fall off. This species has long, tubular fangs, which are characteristic of venomous snakes.

This was from a new shot sequence for the day. Wild atrox, not captive in the least!

Congrats Cody! This spotting is being featured in our PN Fun Fact.:

Great pose! Lucky you had another camera on you! Is that the 400mm prime lens?

haha, got it Env, thanks.

@Env, it's not bananas ;-) I wore kevlar handling gloves and had all safety equipment within an arms reach for my own and his own protection. most of the shots were done from 6-10 ft in front of the snake while laying on my belly with a gloved hand off camera. But yes, it takes someone being a little bit risky to get some of the shots many enjoy!

@Larry - I shot this with a 70-200 most of the time. I also used a 100mm macro lens for some of my other work with him. I added a second shot showing when I had to let him have the camera ;-) unfortunately he was not too happy being photographed that morning and bit my flash twice puncturing my diffuser and splashing venom all over my flash set up!

I hope you shot this with a telephoto! Nice capture!

Again, thanks guys for all the kind words and congrats on SOTD, its been an honor to hold another day!

Thanks everyone! It's nice to see the efforts appreciated by so many!

What a great photo! Congratulations!

Cody :-) congrats again,this time on the SOTD,i was the first to comment this beauty,very good work and awesome spotting page,thanks for sharing