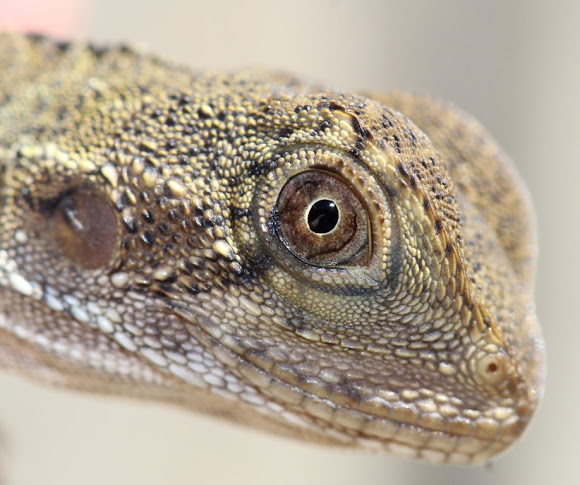 The Eastern Water Dragon is gray-green with cream and black transverse bands on the body and tail.It is especially adapted to an aquatic life, with a long tail that is up to two thirds of its length, and nostrils right on top of its nose. Whenever threatened, he will take to the water, where he can submerge from several minutes up to an hour to escape predators or climb a tree using his powerful legs and long claws.

The eastern water dragon inhabits the coastal water courses of eastern Australia from northern Queensland to Gippsland in eastern Victoria.

Spotted this baby one hanging around our pond in the back garden. Thought I'd try a few shots with the macro lens.

Thanks for the comments everyone! :)

They're still doing ok in spite of human disturbance to the waterways. Macro is obviously working really well. More please :)

Fun fact! Eastern water dragons can remain submerged under water for up to 30 minutes before they need to rise to the surface to breath! These semi-aquatic lizards can reach over 3 feet in length and are a common sight around the waterways of coastal Eastern Australia. https://upload.facebook.com/projectnoah/...

Oh WOW Nath, well done. I'm handing the macro over to you from now on.