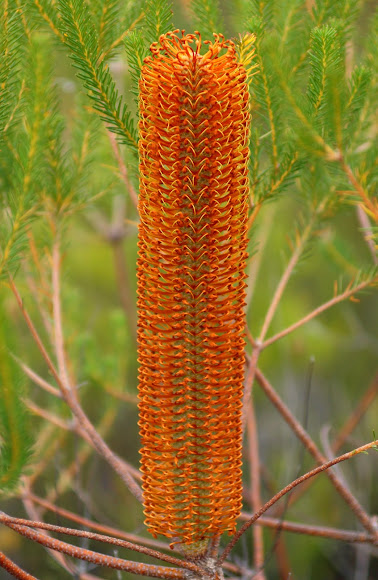 Banksia ericifolia grows in many varied situations, but is most abundant in heaths and woodlands. Its height, 2-5m, will depend on the harshness or otherwise of the conditions. The leaves are tiny and crowded, similar in appearance to European heath (Erica). The flowers are in cylindrical spikes about 15 - 20 cm long, varying from orange to yellow. The hooked styles vary from red to black, being red with yellow tips when the brushes are newly opened. The dead flowers remain on the cone for a long time. The seeds are enclosed by woody valves hidden by the flowers. This banksia is most important for bees and honey-eating birds, being one of the few winter flowerers. Small birds may disappear completely from a heathland where the Banksia ericifolia has been destroyed by fire. Banksia ericifolia flowers from April to August.