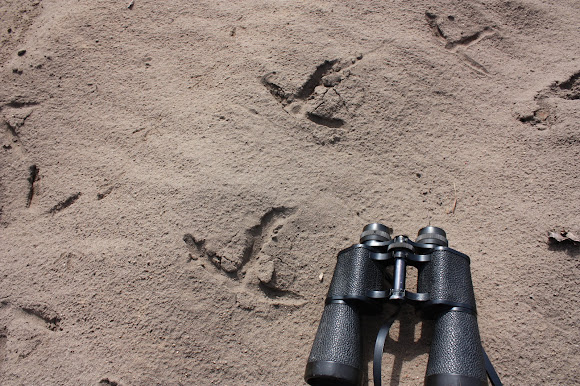 Footprints of Common Crane (Grus grus). The Common Crane (Grus grus), also known as the Eurasian Crane, is a bird of the family Gruidae, the cranes. A medium-sized species, it is the only crane commonly found in Europe besides the Demoiselle Crane. It is also one of only four crane species (with the Sandhill and Demoiselle Cranes and the Brolga) not currently classified as threatened with extinction or conservation dependent at the species level.

Primarily, the largest number of Common Cranes are found breeding in wooded swamps, bogs and wetlands and seem to require quiet, peaceful environs with minimal human interference. They occur at low density as breeders even where common, typically ranging from 1 to 5 pairs per 100 km2.

I photographed only footprints of Common Crane (Grus grus), I saw the birds not far away, but my camera is not that good at longer ranges.