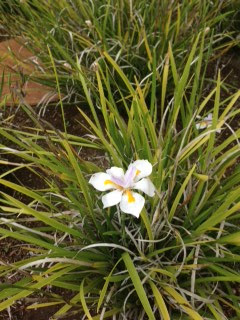 The Fairy Iris is a perennial plant with long, thin, pointy, green leaves. It is very similar to the Wild Iris but can be distinguished by its larger flowers with dark spots on the base of the outer tepals. The flowers are white with six tepals, which have yellow and violet markings. This herbaceous flowering plant also bears dehiscent fruit in the form of green capsules, which split open to release brown seeds.

The Fairy Iris will grow in light shade, but prefers full sun, in which it will flower. It is native to South Africa and is considered an environmental weed in parts of Australia. It is also a popular plant for large gardens because it is durable and resistant to frost and drought.

In its native habitat of South Africa, it is popularly grown in gardens and along roads. It is often planted by mass because it can cover large ares and is resistant to poor weather conditions.