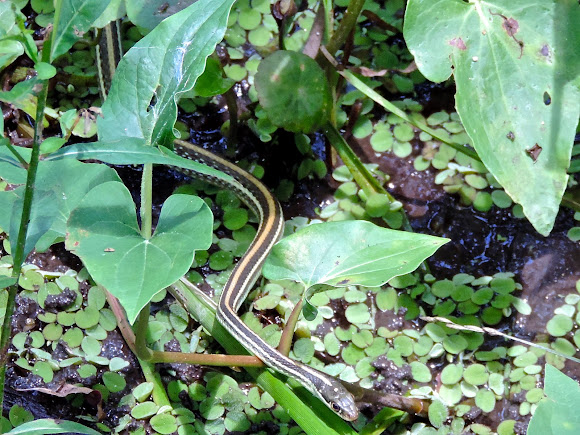 Ribbon snakes eat frogs and toads, and rarely eat insects , lizards, or other snakes. Their chief prey is the cricket frog, a common anuran found year-round almost everywhere in shallow, freshwater environments. They are not venomous, and although they will nip if handled roughly their teeth are unable to inflict serious injury.

Western ribbon snakes occur in grassland and woodland habitats, often in the vicinity of water sources, around swamps and in marshes. Areas with ample sunlight are preferred. They give birth to 4-34 young. This one was at the edge of the boardwalk at Jean Lafitte National Historical Park and Preserve

There are a pair of white spots on the top of the head which, in this specimen, are joined so closely together that they appear as a single spot. In others the spots may be more obviously separated. The spinal stripe begins just behind the head and is initially pale in color. In this specimen the stripe is orange instead of red, a coloration that is uncommon.

Alice - You are so right. I had over 20 photos, most with 20% of the snake visible and the rest covered by leaves and branches. They certainly move fast, but I was lucky, it didn't seem to want to escape into the water so that gave me the opportunity to get some pictures in focus :-)

You had to work fast to get a nice series like this!