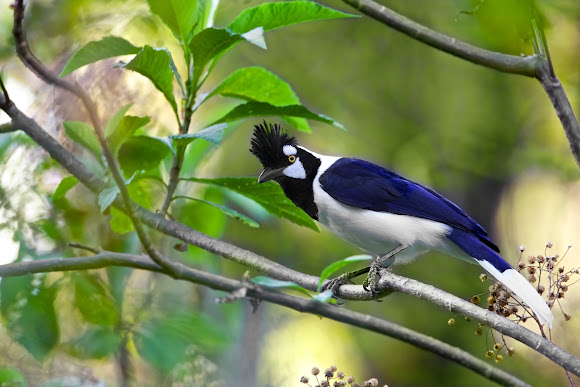 Tufted Jay is confined to the Pacific slope of the Sierra Madre Occidental in western Mexico, where it is uncommon to fairly common within its small range. It is a striking bird, best characterized by the rather spiky, tufty crest, black crown, throat and band across the ear-coverts, with dark blue upperparts including the basal half of the tail, while the rest of the plumage is white or nearly so, and the irides are yellow. Tufted Jay is found in the hilly areas with mixed deciduous and evergreen forest at elevations of 1350–2150 m, and is typically found in flocks of up to 16 individuals.

Tufted Jay are listed as Near Threatened, with only 10,000 individuals to be estimated world wide, with a very limited range.

Thanks Venus and Jellis.

That is one beautiful bird

wow! this is such a cool spotting, thanks for sharing cody! amazing shot